Cruise control is an invaluable feature on Ameri­can ­cars. Without cruise control, long road trips would be more tiring, for the driver at least, and those of us suffering from lead-foot syndrome would probably get a lot more speeding tickets.

­Cruise control is far more common on American cars than European cars, because the roads in America are generally bigger and straighter, and destinations are farther apart. With traffic continually increasing, basic cruise control is becoming less useful, but instead of becoming obsolete, cruise control systems are adapting to this new reality -- soon, cars will be equipped with adaptive cruise control, which will allow your ­car to follow the car in front of it while continually adjusting speed to maintain a safe distance.

What Cruise Control Does 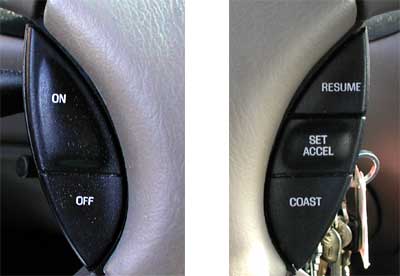 The cruise control system actually has a lot of functions other than controlling the speed of your car. For instance, the cruise control pictured below can accelerate or decelerate the car by 1 mph with the tap of a button. Hit the button five times to go 5 mph faster. There are also several important safety features -- the cruise control will disengage as soon as you hit the brake pedal, and it won't engage at speeds less than 25 mph (40 kph).

The system pictured below has five buttons: On, Off, Set/Accel, Resume and Coast. It also has a sixth control -- the brake pedal, and if your car has a manual transmission the clutch pedal is also hooked up to the cruise control. 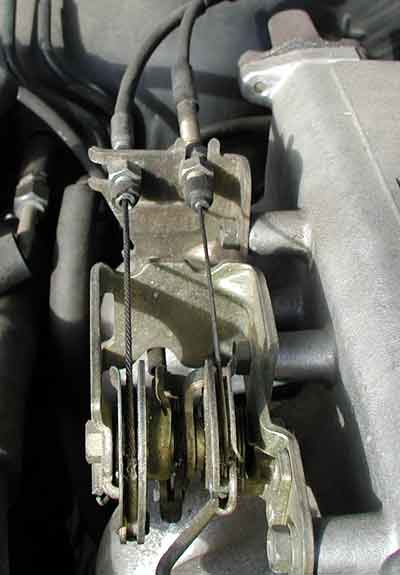 One of the cables is connected to the gas pedal, the other to the vacuum actuator.

The electronically-controlled vacuum actuator that controls the throttle

Many cars use actuators powered by engine vacuum to open and close the throttle. These systems use a small, electronically-controlled valve to regulate the vacuum in a diaphragm. This works in a similar way to the brake booster, which provides power to your brake system.

The brain of a cruise control system is a small computer that is normally found under the hood or behind the dashboard. It connects to the throttle control seen in the previous section, as well as several sensors. The diagram below shows the inputs and outputs of a typical cruise control system.

A good cruise control system accelerates aggressively to the desired speed without overshooting, and then maintains that speed with little deviation no matter how much weight is in the car, or how steep the hill you drive up. Controlling the speed of a car is a classic application of control system theory. The cruise control system controls the speed of the car by adjusting the throttle position, so it needs sensors to tell it the speed and throttle position. It also needs to monitor the controls so it can tell what the desired speed is and when to disengage.

The most important input is the speed signal; the cruise control system does a lot with this signal. First, let's start with one of the most basic control systems you could have -- a proportional control.

In a proportional control system, the cruise control adjusts the throttle proportional to the error, the error being the difference between the desired speed and the actual speed. So, if the cruise control is set at 60 mph and the car is going 50 mph, the throttle position will be open quite far. When the car is going 55 mph, the throttle position opening will be only half of what it was before. The result is that the closer the car gets to the desired speed, the slower it accelerates. Also, if you were on a steep enough hill, the car might not accelerate at all.

Most cruise control systems use a control scheme called proportional-integral-derivative control (a.k.a. PID control). Don't worry, you don't need to know any calculus to make it through this explanation -- just remember that:

A PID control system uses these three factors -- proportional, integral and derivative, calculating each individually and adding them to get the throttle position.

We've already discussed the proportional factor. The integral factor is based on the time integral of the vehicle speed error. Translation: the difference between the distance your car actually traveled and the distance it would have traveled if it were going at the desired speed, calculated over a set period of time. This factor helps the car deal with hills, and also helps it settle into the correct speed and stay there. Let's say your car starts to go up a hill and slows down. The proportional control increases the throttle a little, but you may still slow down. After a little while, the integral control will start to increase the throttle, opening it more and more, because the longer the car maintains a speed slower than the desired speed, the larger the distance error gets.

Two companies are developing a more advanced cruise control that can automatically adjust a car's speed to maintain a safe following distance. This new technology, called adaptive cruise control, uses forward-looking radar, installed behind the grill of a vehicle, to detect the speed and distance of the vehicle ahead of it.

Adaptive cruise control is similar to conventional cruise control in that it maintains the vehicle's pre-set speed. However, unlike conventional cruise control, this new system can automatically adjust speed in order to maintain a proper distance between vehicles in the same lane. This is achieved through a radar headway sensor, digital signal processor and longitudinal controller. If the lead vehicle slows down, or if another object is detected, the system sends a signal to the engine or braking system to decelerate. Then, when the road is clear, the system will re-accelerate the vehicle back to the set speed.

Adaptive cruise control is just a preview of the technology being developed by both companies. These systems are being enhanced to include collision warning capabilities that will warn drivers through visual and/or audio signals that a collision is imminent and that braking or evasive steering is needed.

For more information on cruise control, check out the links on the next page.