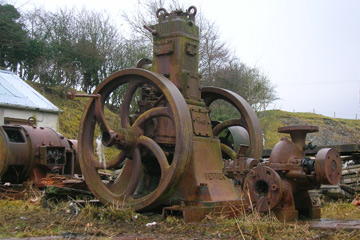 When steam was king, and gas and diesel engines were still in their infancy, hot bulb engines were all the rage. They could burn any liquid combustible fuel, could run without a battery ignition -- sometimes for days -- and they were efficient, simple and robust. For a farmer, a fisherman or a saw-mill operator, where ruggedness and reliability were keys to survival, a hot bulb engine had it all.

But it didn't have everything. It ran in a narrow rpm range, about 50 to 300, and therefore had limited use. It was best as a stationary engine, though there were tractors that used the technology to move -- albeit slowly. The engine was hard to start, and hard to keep going.

Yet despite those challenges hot bulb engines remained in use through the 1950s, and into the 1960s in certain deep rural areas. Today the engines are a mainstay for serious collectors and represent one of the historic landmarks in the evolution of gas engines. The engine's ability to run on a number of fuels may even help engineers manufacture a better modern engine to handle a wide range of alternative fuels.

Keep reading to find out more about how hot bulb engines work.

Hot bulb engines share the same basic components as the vast majority of other internal combustion engines. The detonation, or combustion of gases, pushes a piston housed inside a cylinder. The piston is connected to a flywheel via a crankshaft and connecting rod. This allows the engine to convert heat energy (the combustion) to mechanical energy at the flywheel. The flywheel then drives whatever mechanical component is attached to it.

Unlike gasoline and diesel engines, combustion in a hot bulb engine takes place in a separate chamber referred to as the "hot bulb," or "vaporizer." Essentially the hot bulb extends horizontally off the front of the engine, usually nearest the cylinder. Most hot bulbs looked something like a darning mushroom. The bulb contains a plate of metal, almost like a tea cup saucer, that would heat along with the bulb.

A fuel nozzle, usually a small metered orifice valve, dripped fuel into the hot bulb. The fuel would hit the metal plate, vaporize, mix with air and ignite. A narrow passage connected the bulb and the cylinder. The expanding gases would shoot down the small passage and move the piston in the cylinder.

Gas engines use electricity to fire a spark plug and rotate the crankshaft to get the engine going. Hot bulb engines do not have this luxury. On a mild day -- about 60 degrees Fahrenheit (15.6 degrees Celsius) -- the bulb must be heated for anywhere from two to five minutes, and up to half an hour on cold days or on larger engines. This initial heat, developed with a blow torch in the early days and later through coil and spark plugs, vaporizes the first charge of fuel.

An operator spun the engine's flywheel, the biggest and heaviest part of the entire assembly, (often weighing hundreds of pounds on even the small engines), by hand until the combustion process was going and the engine was up and running.

Once the engine was up and running the heat of combustion would keep the bulb hot enough to keep vaporizing fuel, and the engine would be largely self-sustaining. However, if the load on the engine dropped, or it was used in a very cold environment, the bulb would need periodic or even constant heating. While seemingly simple and reliable, hot bulb engines could be temperamental and had their fair share of quirks and challenges. The next page will discuss some of those traits.

British inventor Herbert Akroyd Stuart established the idea of the hot bulb engine in the late 1800s. The first prototypes were constructed in 1886. The idea was picked up by English engine makers Richard Hornsby & Sons. Production of the engines began in 1891 as the "Hornsby Akroyd Patent Oil Engine. The Hornsby Akroyd engine was a four-stoke model. In the United States two German immigrants, Meitz and Weiss, began production of a two-stroke hot bulb with Joseph Day.

By the turn of the 20th century the engines had reached their peak of popularity and were produced by hundreds of manufacturers. This was also the time when electricity generation was booming and the engines were used to power dynamos. Sweden was a heavy user of the engines (mainly for fishing boats), with more than 70 manufacturers, eventually taking about 80 percent of the market share by 1920.

One of the biggest advantages of hot bulb engines was their ability to use any type of crude fuel. Basically, if the fuel could flow through a pipe and if it would burn then a hot bulb engine could likely run on it.

This aspect of their nature made the engines popular along isolated stretches of oil pipelines, which offered a ready supply of unrefined fuel. The machines were primarily stationary, though there were a few antique tractors that used hot bulb engines for propulsion. As a stationary source of power the machines were ideal for industrial use, whether running a small shop or a small sawmill, they provided steady power for a cheap price. However, because of their low power output to size -- a farm tractor needed a hot bulb engine of about 20 liters to function -- the engines were not used in larger industrial applications like powering a mill.

Preston Foster, curator of collections at the Coolspring Power Museum and a professional antique engine restoration specialist, said hot bulb engines were ideal for their time and place, but did have some drawbacks.

For instance, hot bulb engines did not run well on more refined fuels, such as gas or diesel. "It was mostly kerosene and other less refined fuels," Foster said.

The engines, especially the two-stroke variety, were also prone running backwards, to becoming overpowered with fuel and running almost out of control before the governor could catch up. Foster said the engine components were made at a time when engine metallurgy and machining were relatively crude, parts could break easily, and finding replacements was difficult.

On the American-made two-stroke models the engine would occasionally scavenge oil from the crankcase to use as fuel, robbing itself of lubrication.

It was these drawbacks, compounded by improvements in metallurgy and machining, that led to the downfall of the hot bulb engine.

Ignition timing in hot bulb engines is a hit-or-miss affair, hence the need for a heavy flywheel. Timing was generally established by the engine temperature and load.

Before 1910 fuel was injected into the vaporizer early on the intake stroke. This resulted in the start of combustion being out of synch with the crankshaft angle. This, in turn, meant the engine would only run smoothly at one set of revolutions, or under one type of load. Increasing the load or revolutions (the engines ran best between 50 and 300 rpm) would increase the bulb's temperature, and decrease the ignition time. This led to pre-ignition and missed strokes. Many engines used a water drip to cool the vaporizer and stem some of the worst pre-ignition.

Becoming a Part of History 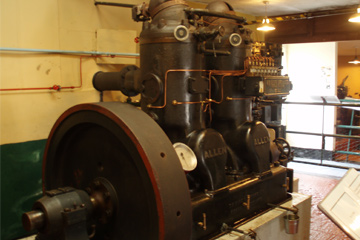 A 2-cylinder, 70 horsepower hot bulb engine built by W.H. Allen & Sons in 1923. The engine is on display at the Internal Fire Museum of Power, Tangygroes, Wales, UK.
Photo courtesy of J.Grover

By the early 20th century most of the problems with machining efficient and strong gas and diesel engines were worked out. Engineers also solved the problems associated with spark ignition, compression ignition, timing and governing of engine speed and power. There was also a growing accessibility to more refined, and therefore more efficient, fuel. All these factors led to the slow death of the hot bulb engines.

Consider the power behind a hot bulb engine. Though they were built large enough to generate 60 horsepower their compression ratio remained small, about 5 to 1. Even a crude diesel engine could generate a compression ration of about 15 to 1. This meant more power and more torque, all in a smaller, more convenient package.

Hot bulb engines were used in Scandinavia until the 1930s, and are still seen, albeit rarely, in canal boats in England. However, for the most part, hot bulb engines are now more curiosities rather than useful tools.

"It was a great source for its time and place," Foster said, adding hot bulb engines simply couldn't keep pace with changes in technology. "I think you could say it was the missing link between the first engines and modern engines," he said.

Is it safe to switch to synthetic motor oil?
How to Dynamically Time an Engine
5 Tips for Preventing Motor Oil Deposits