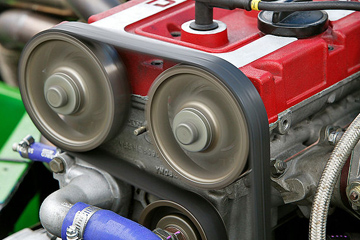 The timing belt itself is just a few bucks, but if the rubber wears through or a tooth breaks, it'll probably crash at least a couple valves in the engine. See more pictures of engines.
Tennen-Gas/Wikimedia Commons

Engine timing is critical to the engine's actual function. A properly timed engine makes sure the fuel is used properly and provides the maximum potential power from each spurt (or injection, if you prefer the technical term) of gasoline. Timing an engine also keeps its moving parts in sync, which keeps them from crashing into each other, leaving the engine inoperable.

There are some variations amongst ignition systems, but most cars on the road can be timed by the static timing method. (The other option is called dynamic timing, which is done with the engine running and requires more expensive equipment, both factors that make the procedure a bit more intimidating.)

A lot of new cars now control timing by computer, but the majority of cars on the road still need this type of hands-on maintenance. If your engine needs to be timed and it's got a distributor and a timing belt, it's probably a candidate for static timing.

Static timing means that the engine's timing is set without actually running the engine. Considering the extent, complexity and expense of tools available specifically for engine timing, skeptics may wonder if an engine can be accurately timed in a driveway with a couple of tools that cost about as much as a couple cases of decent beer. But if you pop the hood and can easily identify the distributor and timing belt, you're probably up to the challenge. And rest assured, hot rodders and weekend racers wouldn't steer you wrong.