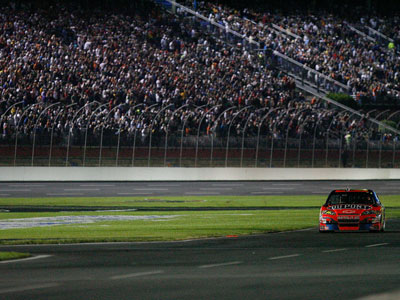 ­Quick, what does NASCAR have to do with environmental sustainability? If you mentioned the grandstand seats at Lowe's Motor Speedway in Concord, N.C., give yourself a pat on the back.

In 2007, Speedway Motorsports, Inc. (SMI), which owns Lowe's and six other NASCAR tracks, purchased 22,000 seats from the Charlotte Coliseum, which was scheduled to meet the wrecking ball after the Hornets left for their new home in New Orleans following the 2001-02 season. Rather than allow the seats to turn to rubble, SMI bought the seats and used them to replace the old concrete bleacher seats at the speedway. In homage to the old basketball team, the seats were left in their original teal color, complete with the old Hornets logo.

­Lowe's isn't the only speedway to get on the trolley with the second R in the recycling triumvirate (reuse). For many years, the scoring towers at Daytona were ones salvaged from a California speedway that had gone bankrupt. Perhaps the best instance of reusing something old to make something new is found in the parking lots of the Las Vegas Motor Speedway. When the track was torn up for repaving, the old asphalt was ground up and reused to pave old dirt parking lots scattered around the property.

Track owners are getting big on recycling­ as well. Most speedways now have major recycling efforts underway, especially for aluminum cans, which are found there in abundant supply after race weekends.

However, there's an even more environmentally friendly trend that's beginning to pop up around the NASCAR circuit these days, one that's been tried and proven on the mean streets of Berkeley, Calif., and Portland, Ore. This trend has people who drink only Fair Trade coffee, run their homes on solar power and can tell you how to convert your old diesel Volvo to run on vegetable oil pushing their driving skills to the limits. It's called hypermiling, and you can look for it at a NASCAR track near you.

Find out what hypermiling is and how it works on the next page.

Hypermiling: From the Highway to the Track 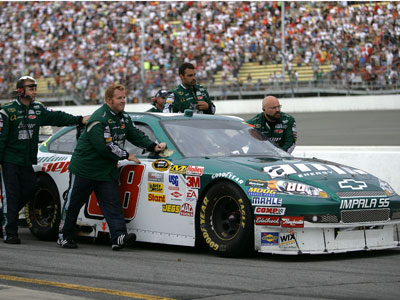 After running out of gas immediately following his hypermiling win, Dale Earnhardt Jr is pushed to the victory lane at the Lifelock 400.
Chris Trotman/Getty Images for NASCAR

So, what is hypermiling? Simply put, it's a method of using simple techniques to get the most mileage out of your car. When hybrids became widely available in the United States early in the 21st century, some drivers weren't satisfied with the EPA ratings of 30 to 45 mpg (48 to 72 km/g). They found that by using sensible driving techniques like slowly accelerating at green lights and coasting to a stop when approaching red lights, some hybrid cars could get as much as 100 mpg (161 km/g) [source: CleanMPG].

­Even drivers of traditionally-powered SUVs can see a notable impact on their vehicles' fuel economy. An Edmunds experiment found that hyperm­iling could squeeze an extra 35.4 percent more mpg from a Land Rover LR3, which usually gets only 12 mpg (19 km/g) in the city and 17 (27 km/g) on the highway [source: Valdes-Dapena, Yahoo Autos].

Using cruise control is another proven way to greatly reduce fuel consumption. A test carried out by Wayne Gerdes, the man credited with coining the term hypermiling, found that using cruise control at speeds of 30 to 40 mph (40 to 64 km/g) can increase fuel economy by double-digit percentages [source: Gerdes].

But here's the rub when it comes to NASCAR and hypermiling: Driving 30 to 40 mph isn't really a viable option if a driver's interested in actually winning the race. Or is it? NASCAR drivers have come to use hypermiling techniques during times when they must drive at low speeds -- when they're following the pace car during a caution flag. Each driver punches the gas to get the engine to full throttle, turns off his ignition and coasts as far as possible before turning it over again. This improves his fuel economy and saves them an extra time-consuming trip to the pit, a move that could conceivably win the race.

This was the case when NASCAR's secret -- or at least overlooked -- use of hypermiling during races came into the spotlight, after Dale Earnhardt Jr. won the Lifelock 400 in June 2008 at Michigan International Speedway. The driver was widely criticized for the win, since he'd coasted beyond the pace car several times during caution flags in an effort to hypermile as much as possible. But the driver mentioned after the race that he was hardly the lone hypermiler on the NASCAR circuit: "Everybody's doing it," he told reporters [source: AP]. While drivers on the circuit don't use the word hypermiling, the eco-conscious world bemusedly looked on after news of Earnhardt's win was published. NASCAR had gone green.

Being the world-class driver that he is, Earnhardt Jr. was more interested in getting the checkered flag than saving the Earth. The circuit isn't too worried about conserving gas. The estimated 175,000 gallons it uses during race season is all provided free of charge by official sponsor Sunoco [source: Fryer]. NASCAR has been eco-conscious in the past, though. During the oil embargo in the early 1970s, the racing circuit did its part by reducing the length of some of its races. The Daytona 500, for example, saw only 450 miles driven in the race in 1974 [source: Rovell].

Hypermiling wins races, though, as Earnhardt proved. On the highway it takes concentration and discipline; on the NASCAR track hypermiling takes nerves of steel. Drivers have to be long on courage to pass their pit crews without stopping for fuel. If you run out of gas on the track, you're out of luck. Still, if a driver's car sputters to a stop on the last lap, at least he can take comfort in knowing that by hypermiling, he's done something beneficial for the planet.

For more information on NASCAR and other related topics, visit the next page.

How NASCAR Tire Technology Works
How NASCAR Works
What is a stock car?