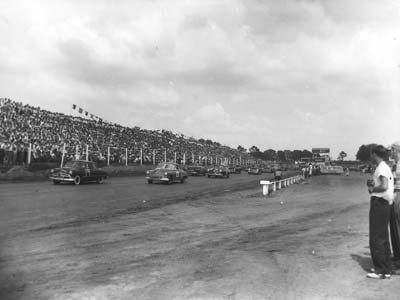 In 1949, during the first NASCAR Grand National race (now known as the Sprint Cup) the original winner was disqualified because of the use of some bootlegger ingenuity
RacingOne/­Getty Images

­With the advent of the automobile came the desire to drive fast. One place this was exemplified was in the southern Appalachians during the wild years of the Prohibition. Shooting up and down dark mountain passes with trunks full of moonshine, bootleggers souped up their cars so they could outrun the law. It seems only natural that tales of high-speed chases would encourage bootleggers to test their mettle against fellow moonshine runners in weekend races.

From legendary origins like these came stock cars -- based on general automobile design but modified for speed -- and they grew in popularity with races springing up across the country. In 1948, Bill Francis Sr. founded NASCAR (National Association for Stock Car Racing) as a sanctioning body to unify the budding sport and provide a set of coalesced rules.

­There were few of those rules in the early days though, and in the spirit of their bootlegging predecessors, NASCAR competitors quickly began to look for ways to push the envelope. After all, if you ain't first, you're last, and in a field of fast cars and daring drivers, NASCAR teams were always looking for an edge up on the competition -- and still d­o to this day. While in some cases this means blatant cheating, in others the line is a bit more blurred.

A little confused? Let's take a closer look at an infamous example. Henry "Smok­ey" Yunick was a mechanical mastermind who had a knack for innovation. At one race, inspectors yanked the gas tank out of his racecar for a closer look -- but that didn't slow down Smokey, who proceeded to drive the car back to his garage from the track. The trick was a hefty 11-foot-long (around 3.4 meter) fuel line that could hold a whole 6 gallons (almost 23 liters) of gas [source: Yunick]. Not breaking any rules with that, right? Well after Smokey pulled that particular stunt, NASCAR was quick to add a few lines to the old rulebook. In fact, Smokey estimated that by 1970, more than half of NASCAR's rules were devoted directly to the efforts of his mechanical machinations -- according to him, a job well done! [source: McGee].

­On the next page, we'll take a closer look at some of the nefarious and not-so-nefarious ways of winning NASCAR races, and whether it's as easy to get away with them as it was back in the day. 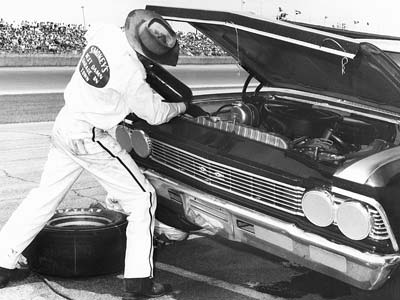 Smokey Yunick, pictured here at the 1967 Daytona 500, really knew his way around under the hood of a car.
Racing One/­Getty Images

­NASCAR used to be a lot less stringent when it came to inspecting cars, as well as regulating and banning certain car components. In the old days, trying to figure out ways to get more speed out of a car was the name of the game. Mechanics were always experimenting and innovating. If the slender rulebook didn't expressly forbid, then anything they could dream up was fair game. Of course, one rule could always still get in their way -- old 12-4-A which includes "Actions detrimental to stock car racing" -- a catchall that was often pulled in a pinch. Whether you prefer to label a particular action cheating or being creative is a call we'll leave up to you, but let's start out by taking a closer look at some of those examples from the early years of stock car racing.

­Cars have to weigh in at a certain minimum weight in order to race -- too light, and they can give an unfair advantage to that driver. Once, Smokey Yunick reportedly used wet sand to reach the necessary inspection weight. When the sand had dried the next morning, it was easy to pour out and lighten the load. Another time, he asked to borrow one of NASCAR's templates (apparatuses used to measure racecars' size and shape), but instead of checking to see if his vehicle was correct, he modified the template and scaled it down. Unfortunately for him, another driver unexpectedly showed up with a car of the same make and model and Smokey was busted [source: Caraviello].­

Some of the other plans teams concocted back then included lightweight aluminum frames and fiberglass hoods, engines injected with nitrous oxide for a little extra pep, tires loaded with weights that boosted the car up to the minimum requirement but could then be swapped out for lighter pair at the first pit stop -- you name it, they tried it.

­But the story doesn't end here, go to the next page for examples of more modern occurrences that some label cheating, others inventiveness.

Besides tinkering with the transmission and souping up the suspension, there are a few other ways to break the rules in NASCAR. For example, if a driver needs a pit stop but the yellow flag refuses to show its face, he or she might intentionally spin out to coax up the caution. In a similar ploy, some drivers have been known to litter debris on the track in order to slow the action. 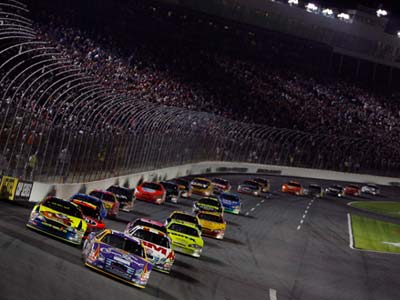 Increased enforcement and an expanding rulebook have made the word cheater common around the NASCAR track.
Chris Graythen/­Getty Images

NASCAR was pretty rough and tumble in the early years, but nowadays, things are a bit different. Perhaps the biggest causative factor is money. Stock car racing is big business these days and sponsors don't like to hear bad publicity about their teams -- nor do teams want to lose their sponsors. When NASCAR tried to change stock car culture by cracking down whenever teams toed the line, some say they made things worse. Now, teams are being labeled cheaters in the news all the time, even though many of them maintain they did nothing of the sort. In the process of trying to clean up its image by taking a hard line on cheating, NASCAR seems to have actually done the opposite in many people's opinions [sources: Hinton, Honeycutt].

­With the advent of the cookie-cutter Car of Tomorrow -- now the required race car model for the NASCAR Sprint Cup Series -- and a whole slew of new construction specifications and rules to go with it, crew chiefs are finding themselves pretty limited when they're looking for ways to enhance their cars. And often when they do manage to find a loophole, NASCAR officials are quick to cry cheating, whereas many of the competitors think the word is too harsh for the work they do. After all, the goal is to win the race -- if flaring out the fenders isn't specifically prohibited in the rulebook and it gives them a slight speed increase, why shouldn't they make the modification? Unfortunately for them, NASCAR doesn't see it that way.

Similarly, NASCAR has been dishing out some serious penalties to teams who try to pull the wool over their eyes, and in some cases teams are even penalized when a car is altered in the course of the race in a way that causes it to fail the post-race inspection. And we're not talking chump change here; fines have crept up past the $100,000 mark and suspensions have stretched to over a month. But that's not even the worst of it [source: Blount]. Teams are also being docked points -- lots of points. Recently, two teams each lost 150, which is equal to the points awarded for a sixth-place finish and can cause a team to tumble down in the rankings [source: NASCAR].

The bottom line? Stiffer penalties don't necessarily mean it's harder to cheat; it's just harder to deal with getting caught. But with the increase in rules it's much easier to get caught. On one hand, some people say trying every trick in the book is still going to happen, certain aspects of it might become more toned down to decrease the likelihood of a crackdown. On the other hand, while some teams are starting to rethink the practice of bending the rules, others have no hesitation in keeping with tradition, even when it comes to flat-out cheating. For example, some illegally fabricate the metal of their cars to make them lighter, others rig the fuel tank to appear full so they can go faster during qualifying -- whatever it takes.

­So the question of whether it's easy to cheat at NASCAR really depends on a number of factors. Namely, what exactly is the issue, how attentive is the inspector and how blatant is the violation? And don't forget, much of the issue involves what an individual considers cheating. Some examples of cheating are pretty obvious while others are more subtle or accidental. On the next page, you'll find more great NASCAR links -- along with some that might interest any non-NASCAR fans as well.

What were the stock car tire wars?
Why is it so hard to understand the NASCAR penalty system?
How Dirt Stock Car Racing Works