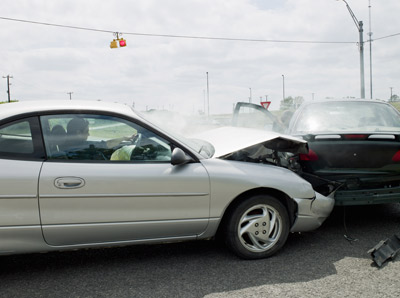 Auto safety has come a long way in the last few decades, and one of the most effective innovations is the crumple zone. Also known as a crush zone, crumple zones are areas of a vehicle that are designed to deform and crumple in a collision. This absorbs some of the energy of the impact, preventing it from being transmitted to the occupants.

Of course, keeping people safe in auto accidents isn't as simple as making the whole vehicle crumple. Engineers have to consider many factors in designing safer cars, including vehicle size and weight, frame stiffness and the stresses the car is likely to be subjected to in a crash. For example, race cars experience far more severe impacts than street cars, and SUVs often crash with more force than small cars.

To find out the forces involved in a collision, and to learn how a well designed crumple zone can minimize occupant injury, read the next page.

What's In a Crumple Zone?

The specifics of crumple zone designs are usually proprietary information that auto makers are reluctant to divulge. They can vary widely, depending on the size and weight of the vehicle. Designers have to strike a balance between too much impact resistance and too little impact resistance. Simple designs can include frame segments built to bend in certain areas or collapse onto themselves. More advanced designs can utilize a variety of metals and other materials carefully engineered to absorb as much kinetic energy as possible. High-performance cars often use a honeycomb design, which offers stiffness under normal conditions, but can collapse and crumple in a crash. 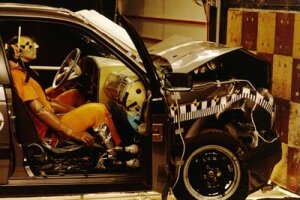