How does safety glass work? 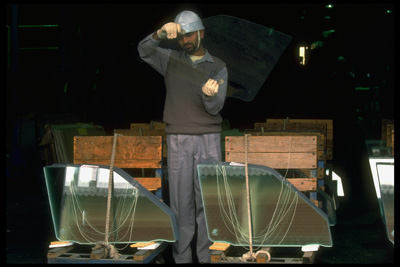 Laminated safety glass resists falling out of its frame during an earthquake or a tornado.

­Tempered safety glass is a single piece of glass that gets tempered using a process that heats, then quickly cools, the glass to harden it. The tempering process increases the strength of the glass to five to 10 times that of untempered glass. Tempered safety glass breaks differently than regular clear glass. When tempered safety glass is struck it does not break into sharp jagged pieces of shrapnel-like glass as normal window panes or mirrors do. Instead, it breaks into little pebble-like pieces, without sharp edges. It is used in the side and rear windows of automobiles. Eyewear uses tempered glass that has been tempered using a chemical process.

You can easily spot tempered safety glass in an automobile rear windows on a sunny day if you are wearing polarized sunglasses. Tilt your head 90 degrees or so and you will see a symmetrical pattern in the glass created during its tempering process.