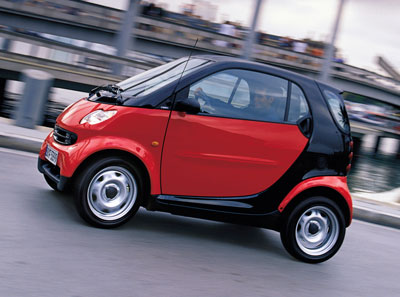 ­With gas prices at historic highs in the United States and fuel-efficient cars in vogue, the time might be perfect for DaimlerChrysler to introduce the Smart Car to U.S. markets. Already popular in Europe, the Smart Car is small in stature but big on economy. The updated Smart Fortwo (named because it's "for two" people) is ready for release in 2008, so we could be seeing a lot more Smart Cars on the road in the near future.

The Smart Car began with Nicolas Hayek, the man who invented Swatch watches. He wanted to make a small car that would be fuel efficient, environmentally responsible and easy to park in small spaces. The Swatch Company collaborated with Daimler-Benz (after a failed venture with Volkswagen) to create the first City Coupe under the company name Micro Compact Car (MCC). Development began in 1994, and the first car was unveiled at the Frankfurt Motor Show in 1997. The MCC went on sale the following year, but Hayek was disappointed with the use of a conventional engine -- he'd wanted a hybrid or pure electric motor -- and the price of the car, which was higher than expected. When initial sales were slow, Swatch pulled out of the partnership, leaving Daimler-Benz (now DaimlerChrysler) full owner of the Smart division. Today, Smart is part of DaimlerChrysler's Mercedes group.

When you see the Smart Car, the first thing that you notice is its size. The City Coupe (renamed the "Fortwo" once Smart began releasing other models), is only 8 feet, 2.5 inches long, less than 5 feet wide and about 5 feet tall. (In comparison, the original Hummer H1 is over 7 feet wide.) That means that instead of parallel parking in line with other cars, a Smart Car can back right up to the curb. Two or three Smart Cars can park that way in a single curbside parking space.

In the next sections, we'll look at what that small size means in terms of safety and gas mileage.