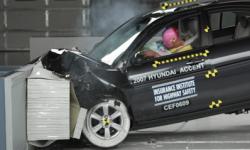 The dummy's job is to simulate a human being during a crash, while collecting data that would not be possible to collect from a human occupant. 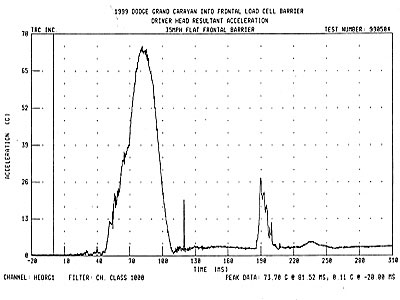 A graph of the head acceleration during a crash test

Inside the dummy are load sensors that measure the amount of force on different body parts during a crash. 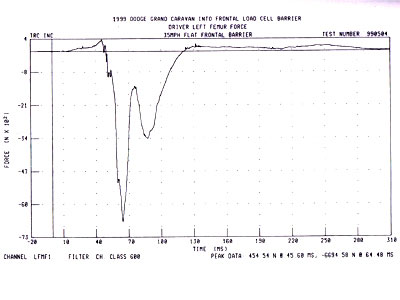 These sensors are used in the dummy's chest. They measure how much the chest deflects during a crash. 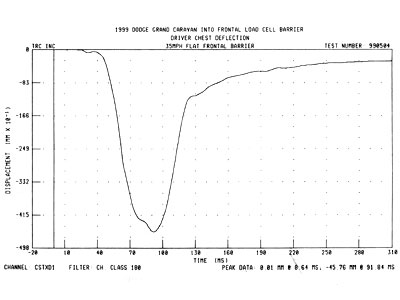 The chest deflection during a 35-mph frontal impact 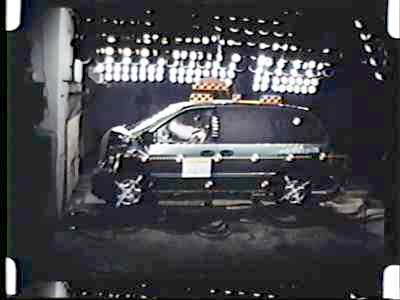 Click on this image for a video of an actual crash test.
(Video time: 2 min, 33 sec)

Before the crash-test dummies are placed in the vehicle, researchers apply paint to them. Different colors of paint are applied to the parts of the dummies' bodies most likely to hit during a crash. The dummy's knees, face and areas of the skull are each painted with a different color. In the following photo, you can see that the blue paint from the dummy's face is smeared on the airbag and that his left knee (painted red) hit the steering column. 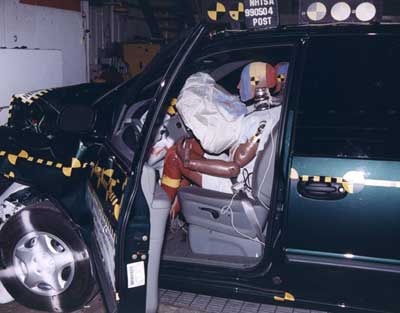 The multicolored paint on the dummy shows where the different body parts hit the car. 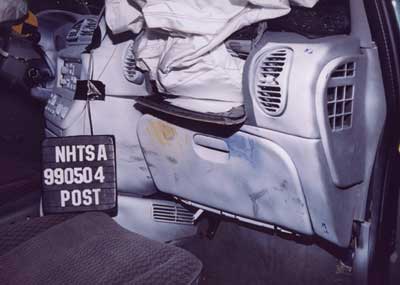 The front passenger-side dummy's knees hit the dashboard during the crash. Also, note that nothing from the engine compartment penetrated the cabin. The engine on most cars is mounted so that in a crash, it is forced backwards and downward so that it won't come into the cabin.

The photo below shows a van that is ready to crash. The dummies have been placed in the car and are in position. All of the instrumentation on the car and dummies has been hooked up and checked. Ballast is added to the car so that the crash-test vehicle's weight -- and the distribution of that weight -- is equal to that of a fully loaded vehicle. A speed sensor has been mounted to the car and positioned so that it will pass through a pickup just as the car hits the barrier. 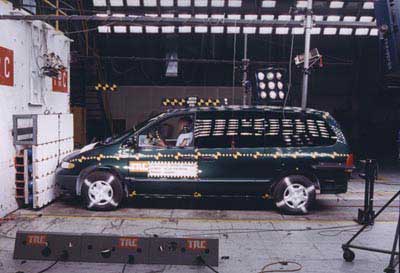 Let's take a look at some pictures. This car got four stars for both occupants in this frontal-crash test. 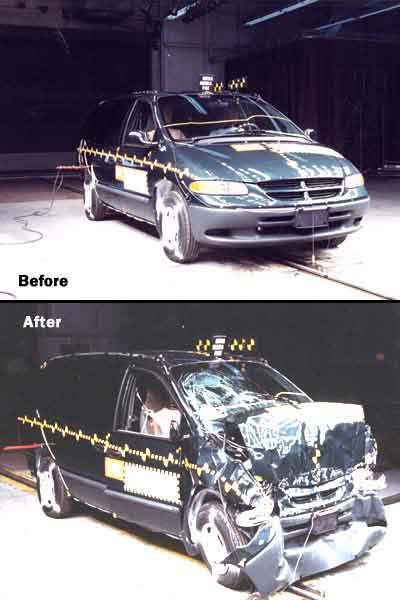 The front of the same car, before and after the test 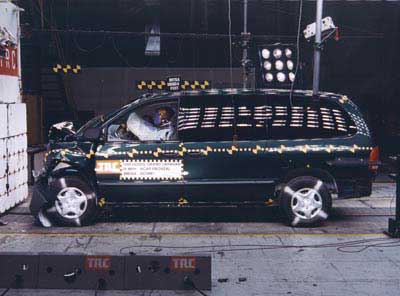 A better view of the front crushing

What are my chances of being seriously injured?

This is a pretty tough question. In order to answer it, we have to define a serious injury. A lot of research has been done (and is still being done) to classify injuries. Crash-test researchers came up with a standard called the Abbreviated Injury Scale (AIS) for classifying different injuries. These same researchers published a manual that contains detailed descriptions of all the injuries normally found in car crashes. Each injury is assigned a rank based on how severe it was: 1 is just minor cuts and bruises; 3 indicates a serious injury that requires immediate medical treatment and may be life threatening; 6 is fatal.

Researchers have used crash test data to determine the likelihood of injuries that may be sustained in a crash. In addition, that data was used to create the NHTSA's star system. This system makes automobile safety ratings easier for consumers to understand when buying a car.