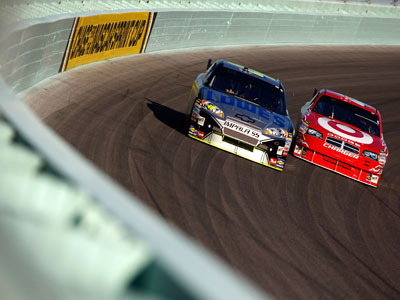 If these two drivers were in the marbles, surely they'd know it by now.
Jamie Squire/­Getty Images Sport

­Nobody really knows who in NASCAR first coined the term marbles, but it's a good bet whoever did so probably felt as if he'd just run over some during a race.

If you've ever watched a NASACAR race and heard broadcasters talk about a driver running over some marbles, they aren't talking about the small glass spheres children used to play with during the 1950s. What they're referring to are the small bits of rubber that come off tires and accumulate near the outside wall of a racetrack. On oval tracks in NASCAR's three premier circuits, the Craftsman Truck, Nationwide and Sprint Cup Series, walls act as barriers to keep these pieces of rubber from leaving the racing surface. Several factors make some tracks worse than others, but the effect remains the same: A car driving through the marbles slips and slides all over the place. You'd think rubber on rubber would be a good thing. After all, more rubber means more traction, right? Wrong. Goodyear Racing Eagles, the tires used exclusively in NASCAR's three series, are extremely sensitive and unsurprisingly lose grip when they're not in direct contact with asphalt or concrete.

­Some tracks, like Tennessee's Bristol Motor Speedway, Delaware's Dover International Speedway and Darlington Raceway in South Carolina, are more conducive to tire wear due to the tracks' abrasiveness. All but two tracks, the road courses in Sonoma, Calif. and Watkins Glen, N.Y., are oval tracks and have outside walls that act as barriers to trap the marbles on the racing surface. Marbles are especially prevalent on tracks that only have one racing groove. It's most noticeable during yellow flag periods or caution laps when cars are weaving from side to side. This behavior may seem erratic, but drivers are simply cleaning off their tires.

­Some race fans may think that these bits of rubber are called marbles because they're of similar size and shape. As convenient as that explanation might be, the truth is that drivers call them marbles because that's precisely what they feel like as they drive over them. On the next page we'll find out why marbles form, what tracks are known for having the worst marbles and what drivers do to avoid running over them. Believe it or not, races have been won and lost due to these seemingly harmless pieces of used tire. 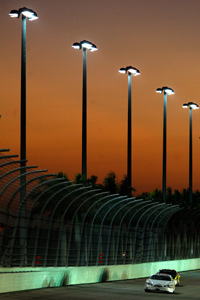 Drivers often weave from side to side on the track to get marbles off their tires.
Jamie Squire/­Getty Images Sport

­To understand how marbles are formed, let's look at the science behind racing tires. Goodyear Racing Eagles, like all racing tires, are made from a rubber compound containing elastomers (elastic polymers) that can stretch and return to their original shape [source: Britannica]. Other components that go into a tire include fillers and rubber attaching agents. These filler agents determine the tire's softness and its grip.

Tires lose traction throughout a race. During a tire stint, tires go through a change in composition. Heat is the main reason for this change or tire wear. When heat is added to a tire, several chemical reactions occur. For one, the tire vulcanizes, or cures. Tires delivered to the track from the Goodyear plant in Akron, Ohio are designed for that specific track. Some tires are cured longer than others, depending on the amount of heat the track will put into a tire. Whatever the case, a tire undergoes a chemical change when it cures: Since heat changes the chemical properties of the elastomers, the molecules change their orientation. When this occurs, the tire has no choice but to wear away. The excess or worn rubber forms the marbles.

Since the tracks at Darlington and Bristol have been repaved, tire wear has decreased over the past few years. But as the weather seasons a track, its abrasive characteristics return. It's just a matter of time before a track like Darlington, traditionally considered the most abrasive surface in NASCAR, recaptures its reputation as a cheese grater on tires. For the most part, NASCAR drivers run the bottom edge of the track. In other words, the racing groove, or fast lane, is around the bottom. When this occurs, the top groove can be very treacherous. Drivers refer to this area as the dirty part of the track. That's where the marbles are.

Needless to say, drivers do not like to race in the marbles. More often than not, a driver that drives in the high groove or in the marbles is forced there against his or her will. Two cars cannot occupy the same spot on the track. Something has to give, right? Drivers have two choices at this point: Crash or drive in the marbles. When a driver is forced onto the dirty part of the track, they tend to back off the accelerator and drive cautiously for a lap or two until their tires are clean. It's only after a driver feels like the tires are free of debris that they will step back onto the gas and start racing hard again.

Now, about that weaving technique: This behavior is just one of the techniques NASCAR drivers employ to combat marbles. We've already seen how heat changes the tire compound -- tires become very soft at high speeds. When drivers are traveling at pace car speed under caution, they're only driving between 60 and 70 mph. Racing tires are designed to travel at high speeds and depend on heat for grip. When they cool they undergo more changes. Hot, sticky tires will pick up all the dirt and debris they run over -- sort of like duct tape picks up lint. Drivers will drive side to side in attempt to scrub off as much debris as possible before the race resumes. Only then will a driver feel confident the car is ready for running at 200 mph, and with any luck, into victory lane.

For more information about tires and other NASCAR related articles, visit the next page.

Is it easy to cheat in NASCAR?
What were the stock car tire wars?
How NASCAR Drafting Works