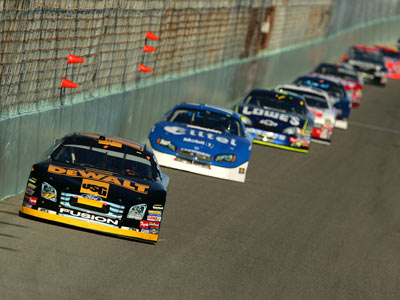 NASCAR drivers try to stay in the groove -- figuratively and literally.
Robert Laberge/­Getty Images for NASCAR

­Everyone knows what it feels like to hit their groove. Whether you're at work, playing sports, or even if you're grooving on the dance floor, finding your groove somehow seems to make the activity effortless. The same is true for NASCAR drivers.

­A racing groove is a term used to describe the best route around a race track. Since most NASCAR tracks are ovals, the racing groove is the fastest and most efficient route around the track. Being in the groove allows drivers to shave precious seconds off their time. There have been many times when a driver has been able to get into the groove, stay there and dominate the race.

But the­ groove isn't like the groove that slot car race tracks had when you were a kid. While the grooves at a NASCAR race track are usually visible, they aren't carved or dug into the surface of the track. If you want to spot a track's groove, look for a wide black line that follows each of the turns. Because NASCAR tires are designed to wear, they leave plenty of rubber on the track surface. Since most drivers want to stay in the groove, that rubber accumulates and ends up marking the groove. The extra rubber can sometimes provide drivers with more grip -- but at other times it can make the track more slippery. That's right -- the groove can change depending on race conditions.

­We'll discuss that tricky factor in the upcoming pages, and learn about NASCAR tracks that have more than one racing groove. Keep reading to learn everything you've ever wanted to know about NASCAR racing grooves and more. 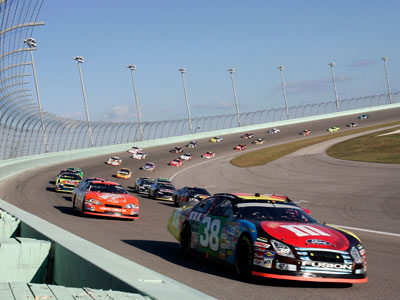 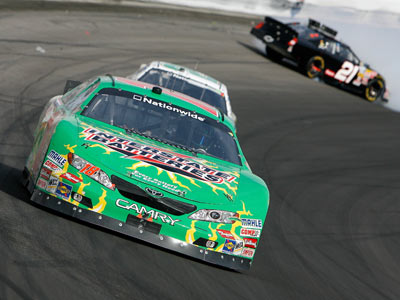 Driving outside of the groove on a race track can be dangerous -- for several reasons.
Jason Smith/­Getty Images for NASCAR

Driving outside the groove means that the car isn't following the most efficient path around the track. That means that instead of being in the groove, the car is either too close to the outer wall of a turn or too close the apron, a term for where the flat infield meets a banked turn on a track.

As you can imagine, both situations can be disastrous for drivers -- for a variety of reasons. Being in the groove isn't only about maintaining speed and winning the race. Being in the groove also lessens the chance of an accident. Near the wall, there's always the chance of being pushed into the wall, or slamming straight into it when the car is coming out of the turn. Driving on the apron is no better. Staying in the groove and off the track's apron helps the driver maintain control. While everyday drivers may have driven onto the shoulder of a turn without disastrous results, at the speeds NASCAR race cars travel, the results can be catastrophic. One of the most famous examples of this is the on-track death of racing legend Dale Earnhardt at the 2001 Daytona 500. Earnhardt was the middle of three cars on the final lap of the race -- Daytona International Speedway has three grooves -- when his left rear fender was nudged by the car on the inside groove. That caused Earnhardt's car to hit the apron and lose control, sending it back up the banked track and into the wall, along with another car.

­In terms of racing strategy, because the groove is the fastest and safest place to be, drivers try to get into it and keep other drivers out of it. To do so, drivers rely on teammates on the track for drafting and help with passing as well as other crew members who act as race spotters to let them know what the other drivers are up to. Even when they're in the groove, NASCAR drivers must constantly monitor shifting racing conditions, including the ever-changing positions of the competition, to maximize their advantage.

­Driver positions aren't the only constantly changing factor during a race. Read the next page to find out how the groove can change during a race, too.

The groove isn't the only slang term used to describe a specific area of a NASCAR track. If you ever hear the phrase, "getting into the gray," that means a driver has entered the apron of a track. Another expression, "driving on the marbles," means the driver is in the area of the track where small pieces of rubber and other debris tend to accumulate during a race. 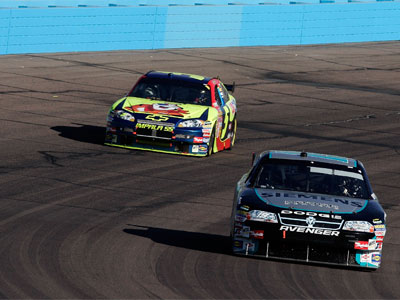 ­In racing, staying in the groove means that a car can stay at or near its top speed for as long as possible. The driver won't have to slow down or waste time (and distance) trying to get into the optimal position. That may sound rather simple, but the groove can change as the race goes on.

As we mentioned earlier in this article, you can typically see the groove (or grooves) on a track because of the build up of rubber from the tires. NASCAR race cars use racing slicks. Racing slicks are a kind of tire that doesn't have ridges or grooves like a normal tire does. Instead, racing slicks are smooth on the surface that contacts the track. The racing slicks are made out of a soft rubber that gets sticky as it heats up. That sticky rubber helps the car adhere to the track; however, the tires are so soft and sticky that some of the rubber sticks to the track itself. That's what creates the black line that makes the groove visible.

­It's easy to see how changing weather conditions -- and changing groove conditions -- can make a driver change his race day strategy. But what happens when there's more than one racing groove to choose from? Read the next page to find out how the strategy changes when a track has two or more racing grooves. 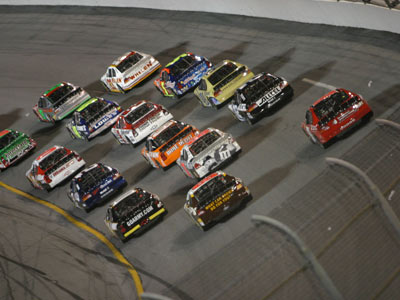