Why is a NASCAR race car called "loose" or "tight?" 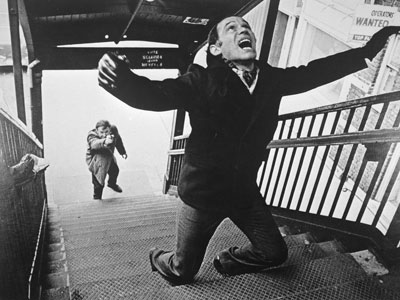 ­If you've got a fever for Detroit muscle and cop flicks, then you must be familiar with the cinematic high speed car chase. Narcotics cop Popeye Doyle chased a subway train carrying heroin dealers in New York during "The French Connection." The Steve McQueen movie "Bullitt" won an Oscar for the editing of the movie's seminal chase through San Francisco. And William Petersen pushed the pedal of a Chevy Impala to the metal driving the wrong way down a Los Angeles freeway during "To Live and Die in L.A."

You're familiar with all those scenes and more; aren't you, tough ­guy? Of course, ­you're also well acquainted with the high speed hard turn, where the driver cuts the wheel to take a corner. The rear wheels fishtail out of the turn and the tires jump wildly up and down off the pavement. The sound engineer always adds a screeching effect of rubber skidding across concrete, quickly followed by the sound of a revving engine as the gas is pushed to the floor and the car straightens and peels off.

You've seen that a million times, but have you ever noticed that the car comes to an almost complete stop when it takes that corner at high speed? If the front of the car slides out of the turn, it's called understeering. If it's the rear of the car that slides outward during a turn, it's called oversteering. Either way, the loss of control eats up precious time. This is bad enough when it happens during a high-speed police chase in a movie. It's even worse when it happens when a win is on the line during a NASCAR race. In races, oversteering and understeering are the result of a car being loose or tight. Find out what this means and how it's remedied on the next page.

Dealing with a Tight or Loose Car in a NASCAR Race 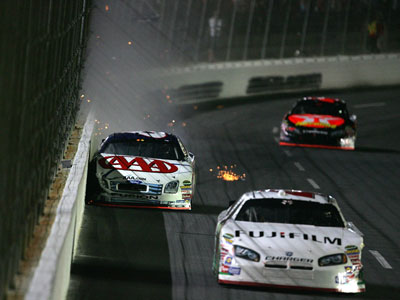 During a turn, centrifugal force pushes the car toward the outside of a curve (and often into the wall, as it did to David Reagan in this 2007 race at Lowe'­s Motor Speedway).
Streeter Lecka/Getty Images

Because the difference between first, second and third place during a NASCAR race can often come down to thousandths of seconds, every tiny advantage a driver can develop counts. Maintaining control over the car's handling is one of the better ways to increase the likelihood a driver will win the race. This can be difficult, however, since the laws of physics are working against him.

­When a NASCAR driver's on a straightaway, he can push the gas as much as he pleases. The wheels -- all pointing forward -- keep the car from drifting from side to side. This is called lateral stability. Once the car comes to a corner, it meets centrifugal force, which builds up in a turn and works to push the car to the outside of the curve. This is why it steering becomes a chore in a curve: You're fighting centrifugal force with the steering wheel.

If the centrifugal force exceeds the lateral stability, the front or the rear of the car will be pushed out of the curve. Depending on whether the car oversteers or understeers, the rear or front tires will lose their grip and the car will slide, possibly hitting the wall. This is good for bloodthirsty fans, but bad for the driver.

In NASCAR lingo, a car that tends to oversteer on the track is considered loose. The rear tires overcome the friction from the track's surface and lose their traction. The rear of the car slides out, and precious seconds are lost. If the front tires of the car tend to lose traction due to understeering in a curve, the car's considered tight.

But why would a car tend to be either loose or tight? Why not both? The answer lies in the special suspensions that NASCAR cars feature. The suspensions are built with springs that absorb the energy from tires that vibrate as they skid in a turn. This energy is taken away from the wheels and distributed elsewhere with dampers. As a result, the tires discontinue their bounce and regain traction more quickly. The suspension springs can be adjusted to compensate for tightness or looseness in the car during turns (called wedge adjustment, which you can read about here). You can use a ratchet a turn that long jackscrew attached to the suspension in either direction to make a car looser or tighter.

Each NASCAR track has its own unique characteristics that can affect a car's handling. The corners at Dover are concrete, while the rest of the track is asphalt. Even more challenging, a track's surface undergoes physical changes during the course of a race. As a result, NASCAR crews make frequent wedge adjustments during a race. A driver uses his wireless communication equipment to alert his crew whether the car is tight or loose, so adjustments can be made in mere seconds during a stop. Crews and drivers ultimately seek balance in the handling -- the absence of tightness or looseness during turns. A balanced car, in other words, wins a race.

Of course, there's another, much less sophisticated way to ensure a car doesn't succumb to centrifugal force during a turn -- slowing down. But, as any NASCAR driver can tell you, taking your foot off the gas isn't an option, unless you're interested in being left in the dust.

For more information on NASCAR and other related topics, visit the next page.

What were the stock car aero wars?
Why doesn't NASCAR race in the rain?
How NASCAR's Car of Tomorrow Works