Conceived as an aerodynamic weapon for the NASCAR circuit, the 1969 Dodge Charger Daytona wore a pointed 18-inch nose, along with a rear spoiler that towered two feet above the trunk. See more classic car pictures.
©2007 Publications International, Ltd.

The 1969 Dodge Charger Daytona was born in controversy. In 1957, the Automobile Manufacturers Association responded to strident calls from the insurance industry and safety lobby to abandon its participation in racing. While there was much disappointment in this wholesale pullout at first, a few years later the AMA's decision didn't look like such a bad idea after all.

The Volkswagen revolution and Eisenhower recession had occurred, and everybody was building economy cars -- so who needed racing? That attitude lasted until about 1962, by which time the industry had staged a full recovery, and auto companies once again lent their support to racing efforts.

The 1969 Dodge Charger Daytona's evolution dates to 1963, when Chrysler decided to overlook the AMA agreement and engage Ford in NASCAR. Chrysler Engineering was asked to design a new 426-cid Hemi V-8, reviving the potent concept that Chrysler had developed in the 1950s.

Hemi Plymouths and Dodges blew everybody's doors off at Daytona in 1964, but Ford retaliated with big-bore engines and "factory" racing options, and continued to dominate the Grand National scene.

In 1966, Dodge introduced the Charger fastback, which looked like an aerodynamic NASCAR contender but proved much slower than its shape suggested. Two years later it was redesigned as a handsome coupe, and Dodge fitted competition models with spoilers to glue them to the track.

While the 1968 was indeed more slippery than its predecessors, it still proved four mph slower than the Ford opposition -- and in stock-car racing, one mph is equal to the length of a football field per lap. That sent Dodge back to the drawing board. The Charger Daytona was the result.

While the 1968 Charger did have good aerodynamic properties, it also exhibited a fair degree of rear-end lift. The solution was a tall, adjustable rear-deck stabilizer made up of twin fins and a horizontal wing.

A pointed snout was added for good measure, and the combination proved to increase lap speeds by five mph, giving Dodge a car that could truly challenge the Fords and Mercurys.

Dodge planned to build 500 of the "winged warriors," the minimum number necessary to qualify them as "production" vehicles for NASCAR.

Continue reading to learn more about the production and success of the 1969 Dodge Charger Daytona. 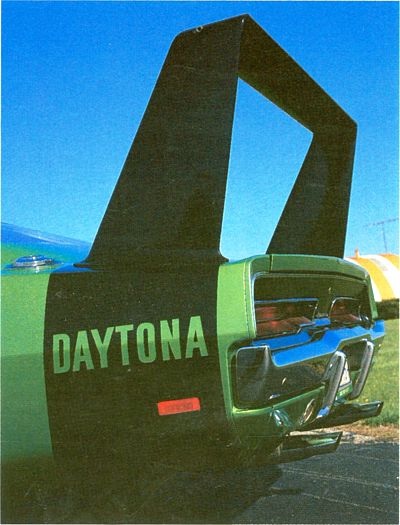 The 1969 Dodge Charger Daytona represented Dodge's brief commitment to NASCAR racing and resulted in almost equaling the success of Ford.