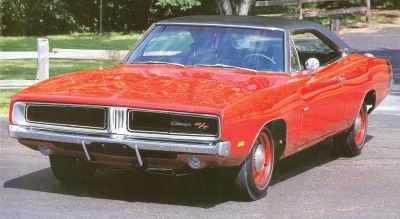 The stylish Dodge Charger was one of the most popular muscle cars of its day. See more classic car pictures.

The 1969 Dodge Charger was a design high point for muscle cars of the day, with its attractive, curvy styling and a roomy, functional interior. A complete set of round gauges faced the driver -- including an optional combined tachometer and clock.

Combining racing heritage, power, and durability Chrysler's Hemi V-8 engine is an American legend. The first Hemi -- named for its hemispherical combustion chambers -- ran from 1951 through 1958. A new 426-cid version powered the corporation's 1964 NASCAR entries, and a detuned variant was offered in production cars starting in 1966.

The street engine was remarkably close to the original. The heavy-duty guts that helped Richard Petty win races made the street engine tough enough to withstand the hard-driving Hemis were invariably subjected to by first owners.

This particular car belongs to an Illinois man, and can go well over 100 miles per hour.

The street Hemi, fed by dual four-barrel carbs, was conservatively rated at 425 bhp with 490 pound-feet of torque. A few other muscle-car engines might have had more low-end power, but they couldn't match the Hemi's high-rpm output. Car and Driver described it as having "a free-breathing, effortless ability to rev forever . . . just doesn't feel like a seven-liter engine-except for the fact that you're suddenly doing 120 and don't know how you got there."

The Charger's round gauges included an optional tachometer/clock combination.

Most supercar engines of the era could be temperamental in traffic. Car Life said the Hemi was "perfectly happy to motor sedately through town."

Our featured car has such options as power steering, power disc brakes, AM radio, 4.10:1 rear end, rear defogger, center console, and vinyl top. Delivered in Lancaster, California, it made its way to Arizona, where it was purchased in 1989 by Douglas Lombardo of Grayslake, Illinois. The rust-free car was restored, but Mr. Lombardo redid the interior by himself. He also replaced components that weren't correct for the year of manufacture.

The hemi was fed by dual four-barrel carbs.

He drives the car to cruises, Mopar shows, and the drag strip, where it ran the quarter-mile in 13.65 seconds and was pulling strong past 100.