How do stabilizer bars work? 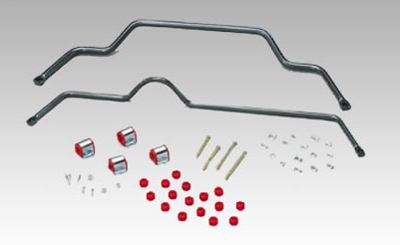 Stabilizer bars are part of a car's suspension system. They are sometimes also called anti-sway bars or anti-roll bars. Their purpose in life is to try to keep the car's body from "rolling" in a sharp turn.

Roll is bad. It tends to put more weight on the outside tires and less weigh on the inside tires, reducing traction. It also messes up steering. What you would like is for the body of the car to remain flat through a turn so that the weight stays distributed evenly on all four tires.

A stabilizer bar tries to keep the car's body flat by moving force from one side of the body to another. To picture how a stabilizer bar works, imagine a metal rod that is an inch or two (2 to 5 cm) in diameter. If your front tires are 5 feet (1.6 meters) apart, make the rod about 4 feet long. Attach the rod to the frame of the car in front of the front tires, but attach it with bushings in such a way that it can rotate. Now attach arms from the rod to the front suspension member on both sides.

When you go into a turn now, the front suspension member of the outside of the turn gets pushed upward. The arm of the sway bar gets pushed upward, and this applies torsion to the rod. The torsion them moves the arm at the other end of the rod, and this causes the suspension on the other side of the car to compress as well. The car's body tends to stay flat in the turn.