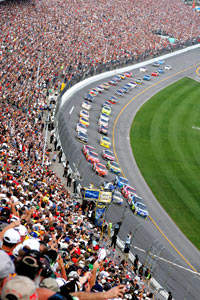 ­Assuming that you're a baseball fan, if you had the choice between attending a Tuesday night Red Sox game against the Baltimore Orioles or watching the Chicago Cubs play in game seven of the World Series at Fenway Park against the Yankees, which game would you chose? You'd choose The World Series, of course; however, what if you could have that same level of excitement on the first day of the season? Some fans may not be ready for adrenaline-packed excitement like that right out of the gate, but NASCAR fans are used to it.

E­very year, the NASCAR season opens up with a bang. Forty-three of the world's greatest stock car drivers race mere inches apart in what can be described as a 200 mph (322 km/h) traffic jam known as the Daytona 500. Drivers lay it all on the line for a chance to run at Daytona. Up until 2005, those 43 spots were up for grabs when the teams and haulers pulled into Daytona each February. However, since 2005, NASCAR has guaranteed the top 35 teams -- based on the owner's point standings from the previous year -- a starting position in the race. Now, more than ever, the pressure to qualify for the Daytona 500 is a year-long struggle for some teams. What makes things even more maddening is the unique qualifying format for the Daytona 500. This article will explain exactly how the 43-car field is set for each Daytona 500.

Before we can delve into qualifying for the big race, let's start by learning more about the Daytona track in the next section.