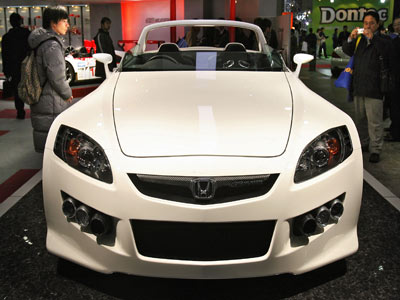 This concept car, like the Honda S2000 that inspired it, has the horsepower to rule the racetrack. Too bad its lack of torque makes it unsuitable for towing.
Toshifumi Kitamura/AFP

It's the (relatively) age-old question: horsepower or torque?

For decades, man has debated over which of these measurements of a car engine's power output is more important, has more of an impact on everyday driving, and is more worthwhile when buying a vehicle. What's the difference, anyway? Horsepower provides highway passing power when your engine is revving hard, allowing you to accelerate at high speeds, while torque gives you low-end power and the ability to move quickly after stopping. In other words, torque lets you do the work, but horsepower lets you do the work quickly.

Torque enthusiasts love the low-end grunt and pull that big engines provide; they're drawn to brawny cars like the upcoming Chevrolet Camaro SS, whose V8 engine has 408 pounds-feet of torque, giving it plenty of pull at a stoplight. Those who like the highway acceleration that horsepower offers could choose a car like the Honda S2000, which has 237 horsepower at the rather high 7,800 revolutions per minute (rpm), but only generates 162 pounds-feet of torque -- not a huge amount.

These cars may go very fast, but otherwise, they don't suit the day-to-day needs of the average driver. Most of us won't ever put our cars on a racetrack or a drag strip, and the continuing volatility of gas prices makes having loads of either horsepower or torque seem downright impractical. However, there is one area where driving with plenty of power can have practical applications -- towing. Whether you're hauling a construction trailer for work or taking your boat to the lake for the weekend, you need a vehicle that has power enough to tow your load comfortably and safely.

­So, what is more important for towing -- horsepower or torque? In this article, we'll find out the answer to that question and discuss the impact that each one has on your choice of truck.