How much horsepower is enough? 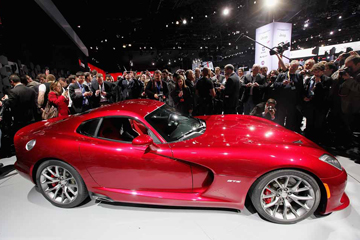 The 2013 SRT Viper makes 640-horsepower. But is that enough? Check out these car engine pictures to learn more!
Mario Tama/Getty Images

How much horsepower does a car need? Depends. But that's probably not the answer you're looking for, right? So let's get a little more specific.

First off, horsepower is a measurement of the ability to produce power (duh) for work. So when you're talking about car engines, horsepower refers to the engine's ability to get the car moving. It's a handy thing to know about, because it will give you an idea of how well a car can accelerate without you actually needing to slide behind the wheel to test-drive it. Plus, when people talk about a car having a number of horses or ponies under the hood, you won't be tempted to call PETA.

One horsepower is equal to 550 foot-pounds per second (745.7 watts). A foot-pound is the amount of energy required to move a pound (0.45 kilograms) (of any substance) one foot (30.5 centimeters). We call horsepower horsepower because when large-scale agricultural and industrial machines were first being introduced, they needed a unit of measurement that people (people who were used to dealing with horses) could understand. One horse can produce about one horsepower of power during sustained activity.

Knowing that using just one horse to move a car would make for a really slow car, cars use engines -- and today's engines can create massive amounts of power. For instance, the 2013 Shelby GT500 Super Snake makes up to 850-horsepower. The 2013 SRT Viper makes 640-horsepower. And then there's the 2013 Chevrolet Spark, which makes just 84-horsepower. But which car has the right number?

Of course, a car that can only cover a foot at a time is pretty useless. As you need to cover more distance and do it in faster times, you simply need more horsepower. You also need more horsepower in order to keep accelerating the car. No one wants to try to merge onto the highway in something that keeps a steady pace of just one foot per second. That's less than walking speed. The more horsepower you have, the faster you're going to be able to accelerate, covering more distance in less time.

So how much horsepower is enough? Depends on where you need to go and how fast you want to get there.

Whenever I'm drooling over performance cars, that practical (but annoying) voice in my head whines, "But how much horsepower do you really need?" Well, it turns out I need much less than what any car on the market currently offers -- so long as I only want to go one foot per second. Relatively low-horsepower cars, like the Chevrolet Spark, are great for several reasons. They save on fuel costs and they work just fine for moving you (and your stuff) from point A to point B. But, when it's time to get from A to B quickly, it's more horsepower that gets the job done.