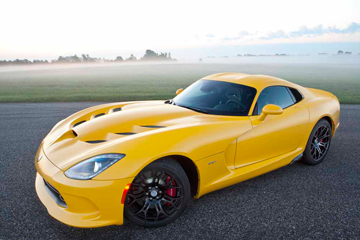 Remember the Dodge Viper? The two-seater sports car from Chrysler with the V-10 engine, supercar specs and a slung-back cockpit that made it look like an Italian sports car? Well, it doesn't exist anymore. Or, to be more accurate, it still exists, but has a different name: The SRT Viper. For several years, Chrysler has been appending the initials SRT (for "Street and Racing Technology") to its high-powered models because they were developed by a special team within Chrysler, a group of engineers and designers focused on cars intended less for commuters and more for enthusiasts who wanted a muscle car that wouldn't be out of place on the Indy 500 racetrack. These cars have included the Dodge Challenger SRT8 (where the 8 indicates an 8-cylinder engine), the Jeep Grand Cherokee SRT8, and quite a few others. But now Chrysler has decided to spin off SRT as a separate division within the company and the Viper is its flagship vehicle. The Dodge Viper SRT10, one of the most powerful supercars ever to roll out of a major American automaker's assembly plant, has become simply the SRT Viper and, after some time spent showing off prototypes at auto shows, the first one to hit the streets is the 2013 model.

If you want a car with the sleek lines of a Ferrari and the horsepower of a rocket sled, the 2013 SRT Viper might be what you're looking for. With a fire-breathing V-10 engine under its hood, it comes across like Superman in a world of 4-cylinder Clark Kents. The interior of the car has been upgraded from what some people once perceived as a fairly cheap molded plastic appearance on older models; the 2013 SRT Viper has brightly colored leather-upholstered seats designed by the same company that makes seats for Ferrari. Perhaps the greatest change over older models is in the electronics: Simply put, it has them while the older Vipers didn't. The Viper was originally designed for old-school drivers who liked the feel of controlling the car all by themselves, without computers making decisions for them. That's no longer legal, but the SRT team has made the new Viper's computerized controls both subtle and optional.

On the next couple of pages we'll take a look at what's under the hood of the 2013 SRT Viper and what's inside. 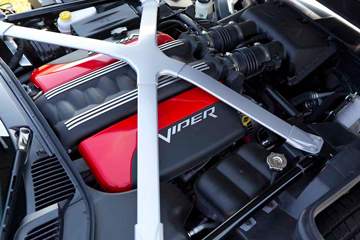 Under the hood of the 2013 SRT Viper is the all-aluminum, mid-front, 8.4-liter, V-10 engine that delivers 640-horsepower and 600 lb.-ft. of torque -- the most torque of any naturally aspirated sports car engine in the world.
Courtesy of Chrysler Group LLC

Let's get the drivetrain specs out of the way first: The 2013 SRT Viper has rear-wheel-drive with a 10-cylinder, 8.4-liter engine that can generate 640-horsepower and 600 pound-feet of torque. The SRT engineers say it has the potential to hit a top speed of 206 miles per hour (331.5 kilometers per hour). That would be the "racing" part of Street and Racing Technology. As you know, there aren't many streets in the United States where 206 miles per hour (331.5 kilometers per hour) would be legal -- but there are quite a few where it would be lethal.

That's one heck of an engine, and it's a lot more powerful than anything you would have seen from Detroit as recently as just two decades ago. The 1992 Dodge Viper only had a 400-horsepower engine and maxed out at 150 miles per hour (241.4 kilometers per hour), though that was still about three times faster than you could have gone on the local freeway without a speeding ticket (and possibly helicopter video coverage on the evening news). In putting this new drivetrain together, SRT had to make some compromises, but they've tried to make them as subtle as possible, so classic Viper drivers won't notice that a computer is monitoring their car's every move. For a large contingency of its owners, part of the Viper's charm has always been its unruliness, its all American refusal to adopt the domesticated charm of its European counterparts. Make the ride too smooth and these owners might feel that somebody has made the Viper downright prissy. Unfortunately, the U.S. government has made this somewhat difficult by mandating ABS braking and traction control. In other words, the 2013 SRT Viper has to feature computer-controlled smoothness -- whether owners want it or not. The SRT Viper will, however, allow you to simply turn stability control off (a feature that's been possible for several years). There's also launch control for racers who want to get moving as rapidly as possible from a standing start. And for drivers with more refined tastes, those who prefer a smoother, more European driving style, SRT offers a pricier GTS model with two-way adjustable shocks and sound-dampening equipment to keep the roar of that 640-horsepower engine from drowning out any Brahms that might be playing on the satellite radio system.

What else? The SRT Viper has 14-inch (35.6-centimeter) disc brakes and Pirelli tires. A lightweight aluminum flywheel makes the engine rev faster, a six-speed manual transmission with improved gear ratios and a lighter body and chassis. Oh, and it's faster than the older Viper, too -- for several reasons. One is that 640-horsepower engine. Another is that the body has been streamlined for a lower drag coefficient and the engine has variable-valve-timing. And the base model is 140 pounds (63.5 kilograms) lighter than the old one. This is a car that screams both sleekness and power without too much loss of American ruggedness.

But what about the one feature of the old Viper that probably drew the most owner complaints: Its interior? Yeah, that's had a work over, too.

It's What's Inside That Counts 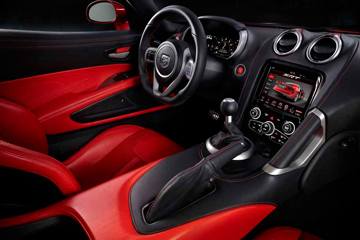 The interior of the old Viper had a reputation for being -- How can we put this delicately? -- cheap. More like the plastic chairs in your local auto mechanic's waiting room than the plush interior of a Lamborghini. That might fit the rugged image of a muscle car with a budget price tag but when a vehicle has a sticker price that can easily edge into the six figures, it really ought to offer amenities more like those in the high rollers lounge at a Las Vegas casino. Not surprisingly, SRT has that covered, mostly with leather upholstery, supplemented with soft grain vinyl. The interior color scheme is downright pretty, in the macho sort of way a Viper would warrant. There are color accents on the seats and matching color stitching on the doors, consoles and instrument panel.

Sabelt, the company that makes seats for Ferrari, has designed shell seats for the 2013 SRT Viper. In the higher-priced GTS model, you get standard Napa leather upholstery or optional Italian Laguna leather. The Viper, being a race car as well as a street car, the ceiling is higher to accommodate the driver's helmet (or just a taller driver). And, in keeping with the Viper's transition from the analog era to the digital age, the dashboard has been changed into the sort of electronic wonderland expected these days of luxury (and even a lot of mid-priced) cars. There's an 8.4-inch (21.3-centimeter) console screen with touch controls for Bluetooth connectivity, satellite radio and a GPS. You can also choose between 12 and 18 speakers for your sound system (in case you ever get tired of listening to that incredible engine growl). The touch screen includes what SRT calls an electronic vehicle information display, or EVIC for short, with a "high-definition presentation of performance-oriented feedback to the driver" [source: Drivesrt.com]. This feedback includes acceleration times, braking distance and top speeds, the sort of information that a racing driver needs more than a commuter, but you can bet that even drivers who only use their Viper on the street will peek at it every now and then.

There will inevitably be drivers who miss the 'rough edges' of the Viper of old and resent the intrusion of drive-by-wire computer controls on a car that once challenged a driver to take a sharp turn and come out pointed the right way. SRT has gone out of its way to make the new 2013 Viper as familiar as possible for these 'old-timers' while still making it user friendly (yes, and government-safety-mandate friendly) for drivers who came of age in the era of the Prius. Or for those drivers who just want a car that combines European elegance with lingering traces of the American muscle car spirit. It's anybody's guess if this is a car that will please both groups or if this is a compromise that won't please anyone. But either way, you can't say that Chrysler hasn't given it one hell of a try.

Okay, I'll 'fess up. I drive a Prius. It's electronic right down to its door handle. Its motor wouldn't know how to growl if it took lessons from a saber-toothed tiger and it will never go half as fast as the 2013 Viper. Which is a good thing, because the speeding tickets here in California are getting so expensive that one might cost me more than I'm getting paid to write this article. But I also remember the first time I stepped on the accelerator of a V-8 powered car with a manual transmission and how it felt like I'd hitched a ride on a moon rocket. I can only imagine what it feels like to drive a V-10 with 640-horsepower and 600 pound-feet of torque. Or, no, I actually can't. But it must be quite a ride.