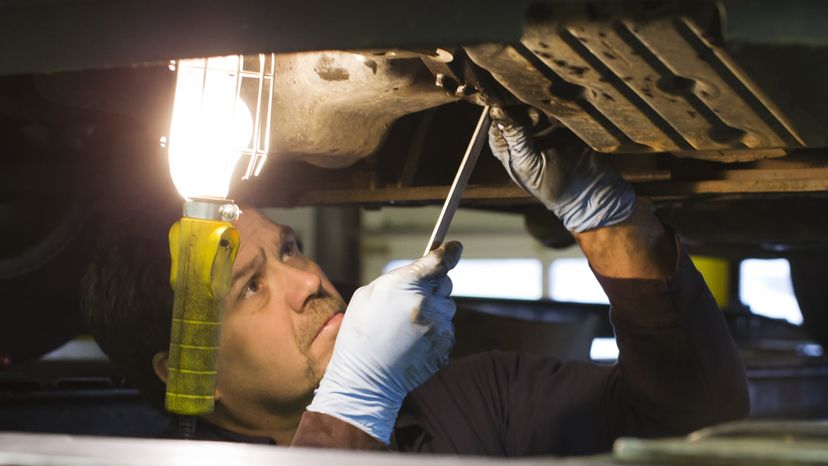 Do you even know where is the differential on your car? Reza Estakhrian/Getty Images

The differential has three jobs:

In this article, you'll learn why your car needs a differential, how it works and what its shortcomings are. We'll also look at several types of positraction, also known as limited slip differentials.

Why You Need a Differential

For the non-driven wheels on your car -- the front wheels on a rear-wheel drive car, the back wheels on a front-wheel drive car -- this is not an issue. There is no connection between them, so they spin independently. But the driven wheels are linked together so that a single engine and transmission can turn both wheels. If your car did not have a differential, the wheels would have to be locked together, forced to spin at the same speed. This would make turning difficult and hard on your car: For the car to be able to turn, one tire would have to slip. With modern tires and concrete roads, a great deal of force is required to make a tire slip. That force would have to be transmitted through the axle from one wheel to another, putting a heavy strain on the axle components.

What Is a Differential? 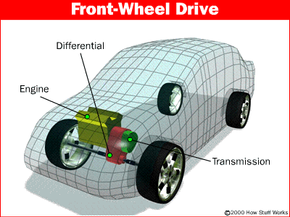 The differential is a device that splits the engine torque two ways, allowing each output to spin at a different speed. 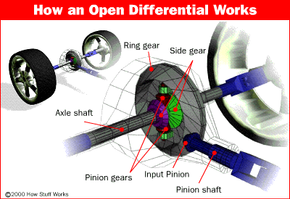 When a car is driving straight down the road, both drive wheels are spinning at the same speed. The input pinion is turning the ring gear and cage, and none of the pinions within the cage are rotating -- both side gears are effectively locked to the cage.

Note that the input pinion is a smaller gear than the ring gear; this is the last gear reduction in the car. You may have heard terms like rear axle ratio or final drive ratio. These refer to the gear ratio in the differential. If the final drive ratio is 4.10, then the ring gear has 4.10 times as many teeth as the input pinion gear. See How Gears Work for more information on gear ratios.

When a car makes a turn, the wheels must spin at different speeds.

In the figure above, you can see that the pinions in the cage start to spin as the car begins to turn, allowing the wheels to move at different speeds. The inside wheel spins slower than the cage, while the outside wheel spins faster.

The open differential always applies the same amount of torque to each wheel. There are two factors that determine how much torque can be applied to the wheels: equipment and traction. In dry conditions, when there is plenty of traction, the amount of torque applied to the wheels is limited by the engine and gearing; in a low traction situation, such as when driving on ice, the amount of torque is limited to the greatest amount that will not cause a wheel to slip under those conditions. So, even though a car may be able to produce more torque, there needs to be enough traction to transmit that torque to the ground. If you give the car more gas after the wheels start to slip, the wheels will just spin faster.

If you've ever driven on ice, you may know of a trick that makes acceleration easier: If you start out in second gear, or even third gear, instead of first, because of the gearing in the transmission you will have less torque available to the wheels. This will make it easier to accelerate without spinning the wheels.

Now what happens if one of the drive wheels has good traction, and the other one is on ice? This is where the problem with open differentials comes in.

Remember that the open differential always applies the same torque to both wheels, and the maximum amount of torque is limited to the greatest amount that will not make the wheels slip. It doesn't take much torque to make a tire slip on ice. And when the wheel with good traction is only getting the very small amount of torque that can be applied to the wheel with less traction, your car isn't going to move very much.

Another time open differentials might get you into trouble is when you are driving off-road. If you have a four-wheel drive truck, or an SUV, with an open differential on both the front and the back, you could get stuck. Now, remember -- as we mentioned on the previous page, the open differential always applies the same torque to both wheels. If one of the front tires and one of the back tires comes off the ground, they will just spin helplessly in the air, and you won't be able to move at all.

The next few sections will detail some of the different types of limited slip differentials, including the clutch-type LSD, the viscous coupling, locking differential and Torsen differential. 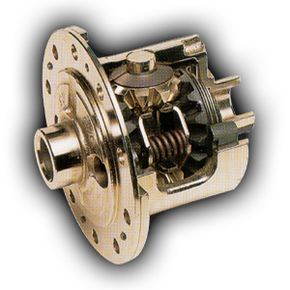 This type of LSD has all of the same components as an open differential, but it adds a spring pack and a set of clutches. Some of these have a cone clutch that is just like the synchronizers in a manual transmission.

The spring pack pushes the side gears against the clutches, which are attached to the cage. Both side gears spin with the cage when both wheels are moving at the same speed, and the clutches aren't really needed -- the only time the clutches step in is when something happens to make one wheel spin faster than the other, as in a turn. The clutches fight this behavior, wanting both wheels to go the same speed. If one wheel wants to spin faster than the other, it must first overpower the clutch. The stiffness of the springs combined with the friction of the clutch determine how much torque it takes to overpower it.

Getting back to the situation in which one drive wheel is on the ice and the other one has good traction: With this limited slip differential, even though the wheel on the ice is not able to transmit much torque to the ground, the other wheel will still get the torque it needs to move. The torque supplied to the wheel not on the ice is equal to the amount of torque it takes to overpower the clutches. The result is that you can move forward, although still not with the full power of your car.

Th­e viscous coupling is often found in all-wheel-drive vehicles. It is commonly used to link the back wheels to the front wheels so that when one set of wheels starts to slip, torque will be transferred to the other set.

The viscous coupling has two sets of plates inside a sealed housing that is filled with a thick fluid, as shown in below. One set of plates is connected to each output shaft. Under normal conditions, both sets of plates and the viscous fluid spin at the same speed. When one set of wheels tries to spin faster, perhaps because it is slipping, the set of plates corresponding to those wheels spins faster than the other. The viscous fluid, stuck between the plates, tries to catch up with the faster disks, dragging the slower disks along. This transfers more torque to the slower moving wheels -- the wheels that are not slipping.

When a car is turning, the difference in speed between the wheels is not as large as when one wheel is slipping. The faster the plates are spinning relative to each other, the more torque the viscous coupling transfers. The coupling does not interfere with turns because the amount of torque transferred during a turn is so small. However, this also highlights a disadvantage of the viscous coupling: No torque transfer will occur until a wheel actually starts slipping.

A simple experiment with an egg will help explain the behavior of the viscous coupling. If you set an egg on the kitchen table, the shell and the yolk are both stationary. If you suddenly spin the egg, the shell will be moving at a faster speed than the yolk for a second, but the yolk will quickly catch up. To prove that the yolk is spinning, once you have the egg spinning quickly stop it and then let go -- the egg will start to spin again (unless it is hard boiled). In this experiment, we used the friction between the shell and the yolk to apply force to the yolk, speeding it up. When we stopped the shell, that friction -- between the still-moving yolk and the shell -- applied force to the shell, causing it to speed up. In a viscous coupling, the force is applied between the fluid and the sets of plates in the same way as between the yolk and the shell. 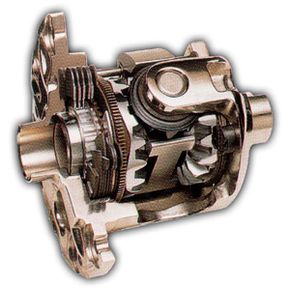 The locking differential is useful for serious off-road vehicles. This type of differential has the same parts as an open differential, but adds an electric, pneumatic or hydraulic mechanism to lock the two output pinions together.

The Torsen differential* is a purely mechanical device; it has no electronics, clutches or viscous fluids.

However, if one set of wheels loses traction completely, the Torsen differential will be unable to supply any torque to the other set of wheels. The bias ratio determines how much torque can be transferred, and five times zero is zero.

*TORSEN is a registered trademark of Zexel Torsen, Inc.

The HMMWV, or Hummer, uses Torsen® differentials on the front and rear axles. The owner's manual for the Hummer proposes a novel solution to the problem of one wheel coming off the ground: Apply the brakes. By applying the brakes, torque is applied to the wheel that is in the air, and then five times that torque can go to the wheel with good traction.

Can You Guess the Answer?