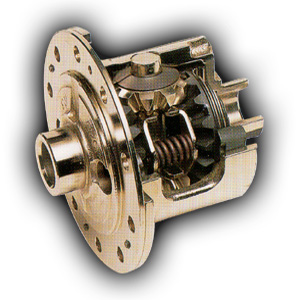 This type of LSD has all of the same components as an open differential, but it adds a spring pack and a set of clutches. Some of these have a cone clutch that is just like the synchronizers in a manual transmission.

The spring pack pushes the side gears against the clutches, which are attached to the cage. Both side gears spin with the cage when both wheels are moving at the same speed, and the clutches aren't really needed -- the only time the clutches step in is when something happens to make one wheel spin faster than the other, as in a turn. The clutches fight this behavior, wanting both wheels to go the same speed. If one wheel wants to spin faster than the other, it must first overpower the clutch. The stiffness of the springs combined with the friction of the clutch determine how much torque it takes to overpower it.

Getting back to the situation in which one drive wheel is on the ice and the other one has good traction: With this limited slip differential, even though the wheel on the ice is not able to transmit much torque to the ground, the other wheel will still get the torque it needs to move. The torque supplied to the wheel not on the ice is equal to the amount of torque it takes to overpower the clutches. The result is that you can move forward, although still not with the full power of your car.