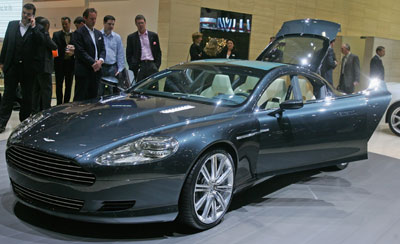 If you were to judge Aston Martin's success just by watching a few James Bond movies, you might think the British automakers have it made. After all, their cars are slick, fast and expensive -- the company's motto is "power, beauty and soul." Like most sports car companies, Aston Martin's dedication to quality and performance has achieved a loyal fan base that reaches far beyond the United Kingdom.

With such dedication to the Aston Martin brand, most fans eagerly anticipate any news of an upcoming concept. The company is currently under private ownership, so expectations are high for potential new design features or engine specifics. After working out initial plans during the summer of 2005, the company introduced the Aston Martin Rapide concept car at the North American International Auto Show (NAIAO) in 2006. Although the car is scheduled for production in 2009, Internet bloggers are already frothing at the mouth over the Rapide.

What type of engine will the Rapide use? How many people will it seat? Will it finally come with all the cool gadgets James Bond gets to use? In this article, we'll take a look at the Aston Martin Rapide and talk about some of the changes in store for 2009.