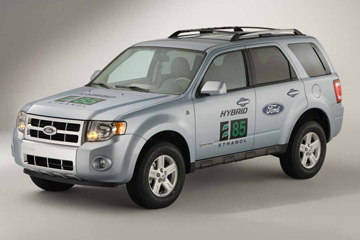 Some vehicles, like this Ford Escape Hybrid E85, are specially designed to run on a mixture of 85 percent ethanol and 15 percent gasoline. But how will your car's engine tolerate even 15 percent ethanol? Check out these Future Hybrid Car Pictures to learn more!
Courtesy of Ford Motor Company

Do you want to know the truth? We have more corn than we know what to do with -- and corn is cheap. It's taken the place of cane sugar in most of our prepared and packaged foods. Not only that, but it's increasingly sneaking into our gasoline, too, in the form of ethanol.

Conventional wisdom tells us that an inexpensive, domestically produced substitute for fuel would be a good thing; unfortunately, it's not that simple. With few exceptions, ethanol is not an acceptable fuel on its own merits. To some extent, however, ethanol does succeed at diluting our petroleum-based gasoline to help stretch our supply. When the United States first embarked on this strategy, only a small percentage of ethanol was added to the mix -- generally, most engines didn't even notice and kept running as usual. But now, gasoline is most commonly produced with 10 or 15 percent ethanol (known as E10 and E15, respectively) and some politicians want to push that to as high as 20 percent. (We should also note that there's an ethanol-gas blend known as E85 -- which contains 85 percent ethanol and 15 percent gasoline -- but that's only acceptable for use in specially engineered vehicles marketed with a "Flex Fuel" designation.)

How much of a difference can there be between E10 fuel, which is in widespread use (although not warmly embraced) and E15 fuel? How much damage can be caused by that extra 5 percent? The evidence is compelling enough that in 2011, several automakers said that owners of older cars running E15 were in danger of voiding their warranties. Although it must be said that most cars older than the Environmental Protection Agency's 2001 model year cutoff were unlikely to still have valid, unexpired warranties, anyway [source: Evarts].

So what's the big deal? We're used to E10, after all -- and presumably, our cars are, too. But when the EPA designates a fuel blend as "legal," they're really enabling themselves to saturate the market with this diluted gasoline, since the agency can ultimately control what's available to consumers. If E15 is cheaper to supply than E10, drivers will gradually be forced to buy it. It's that, or don't fill up at all.

Mike Allen of Popular Mechanics says that under ideal conditions, a gasoline-ethanol blend is perfectly acceptable. But consumers cannot control those conditions, and they have no way of knowing if the fuel they're buying has been contaminated. All gasoline is susceptible to changes due to weather and moisture content, but ethanol exacerbates this problem. A higher concentration of alcohol in a gas tank (any gas tank -- at the production facilities, the tankers traveling on the highway, the storage tanks at a gas station, your car's reservoir and even the red plastic can sitting on the floor in your garage) means that the alcohol can grab and hold more water than straight gasoline. If the water concentration gets high enough, the alcohol and water will drop out of suspension, turning the fuel into a globby mess that your car's engine can't use. And it can happen at any stage of the transport, storage and usage process -- even getting worse as it goes along. In short, ethanol increases the chances that your car will be damaged trying to process and burn contaminated gasoline.

Let's assume that most of the time the fuel's environmental conditions aren't seriously compromised, its ethanol stays in suspension, and the gasoline is properly reaching its destination. The ethanol in the fuel is still doing damage. Many older fuel system components weren't designed to resist alcohol's corrosive properties, and as ethanol travels through the system it can cause considerable damage. Gasoline companies sometimes even market specific blends as having "engine cleaning" properties, but if the alcohol in the fuel cleans old deposits from engine components, those deposits won't simply dissolve -- they'll probably just get carried along until they're stuck elsewhere.

A 2012 study by Auto Alliance showed that some cars (model years 2001 to 2009) showed internal engine damage as the result of using an ethanol fuel blend. Damage to the valves and valve seats was evident in some of the cars tested. One of the 16 cars in the Auto Alliance study failed emissions compliance standards, which means it emitted more pollution than allowed by the EPA. The study also showed that cars running on E15 take a hit on gas mileage -- so they require more fuel to travel the same distance, which counteracts the benefits of diluting it in the first place.

Some organizations are trying to delay the launch of E15 until the public understands how the change will affect them. The EPA says that stickers on gas pumps will adequately communicate what E15 means, and assure users that based on the EPA's information, E15 is safe for most cars. The new blend was expected to make its mass-market debut near the end of 2012; but even now, the infrastructure improvements needed to distribute and sell E15 aren't yet in place. In late 2012, AAA released a study that found 95 percent of drivers still don't know what E15 is, and of course, have no idea how or why it could harm their cars. E15 won't be delayed forever -- the agricultural industry lobby is a powerful force -- so perhaps there's still enough time to educate consumers.

I love popcorn and buttery, salty grilled cobs as much as the next girl -- but at least I admitted to myself, long ago, that corn is not actually a vegetable. It's as sweet as candy, and features just as much nutritional value, which is probably why it's so often processed and used for confectionary purposes. But about 40 percent of the 2012 domestic corn crop was designated for fuel production [source: Bowman]. Fuel might actually be a more noble objective than food, in theory.

But even if ethanol was harmless to a car, it falls short in other areas. It's a biofuel, a category that implies there's some kind of environmental benefit as a result of its use. There are other kinds of biofuels besides ethanol; and as I mentioned, there are also other types of ethanol besides those derived from corn. And as it turns out, corn ranks among the least environmentally friendly biofuels in terms of greenhouse gas emission reduction. Corn ethanol hardly reduces a car's toxic emissions at all -- in fact, 3 percent is about the best that can be expected [source: Garrett].

Other sources, like sugar and hemp, give much better statistics (upwards of a 50 percent reduction in greenhouse emissions). Unfortunately, sugar cane ethanol comes from Brazil and is saddled with high import tariffs, and it's still illegal to raise hemp in the United States (even the industrial-grade stuff that doesn't have any psychoactive benefit or pleasurable nefarious purpose).

It's unclear (at least to me) if other types of ethanol have the same engine-clogging properties as corn. I won't go so far as to draw parallels between gasoline sludge and elevated blood sugar levels. But even though ethanol is increasingly pumped into our gasoline supply for purely political reasons, we can hope that reasonable alternatives might be considered ... eventually.

What is my vehicle's greenhouse gas score?
How the SEAT León Twin Drive Ecomotive Works
Solar Panels Are Slowly Making Their Way on Cars