Hemp Energy: Sounds like a joke, but it’s not! 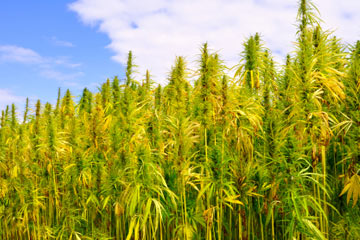 Is hemp the energy of the future? Check out these alternative fuel vehicle pictures to learn more!
©iStockphoto.com/John_ Woodcock

Among the many uses of hemp: food, textiles, paper and even fuel.

We’re still a ways from a hemp-powered car, but industrial hemp has made a number of headlines in past years, especially as an alternative energy source, as people have begun to take a closer look at the low tetrahydrocannabinol strains of Cannabis sativa. Universities have studied the plant, politicians have explored the subject and at least one government has dived head on.

First, a bit of background on hemp and its biofuel qualities. In a blog post for The Guardian about alternative fuels, Giulio Sica explains the qualities that make hemp a good energy source:

[Hemp] has been successfully used for many years to create bioethanol and biodiesel, is environmentally friendlier to produce than sugar beet, palm oil, corn or any of the crops mentioned in the report and can grow in practically any temperate to hot climate leaving the ground in better condition than when it was planted.

Growing hemp is easier than many other plants. The plant is efficient, bred to improve quality, yield, stress tolerance and decreased cost per ton. Furthermore, hemp grows quickly while also requiring less energy and fertilizer, and doesn’t require chemicals after planting. It can even help the farm by breaking the disease cycle of other crops. Sica considers it "a perfect crop to offset the carbon currently produced by fossil fuels."

Cannabis seeds, often discarded, contain the plant’s oils that can be turned into fuel. At the University of Connecticut, researchers found industrial hemp to contain viable qualities for producing biodiesel. Hemp biodiesel produced by graduate students at the school had a 97 percent conversion efficiency. It will be interesting to see the university’s role in this alternative fuel source, since it owns a patent on a biodiesel reactor system that can make fuel out of various inputs, including hemp.

Why aren’t we driving hemp-powered cars then? Well, sounds like they’re at least working on it. Sica explains:

As far as research and implementation of hemp for biofuel, the US is way ahead of Europe and there are a range of websites dedicated to the use of hemp as a fuel for cars.