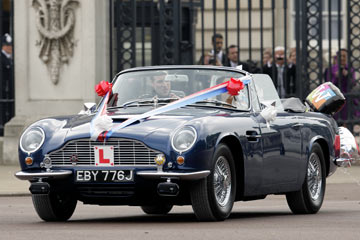 Wine has powered movement for thousands of years, but usually only as the "liquid courage" that enables people to perform uncharacteristic feats such as dancing after drinking a few glasses. So maybe it's not surprising that investors and inventors have been working on ways to turn wine into fuel for powering vehicles. It may not be as simple as toasting and pouring a delicious glass of vino down the hatch, but converting wine to auto fuel actually works. Whether or not it will be a viable alternative to regular, petroleum-based gasoline any time soon is another story.

Alcohol is already useful as a fuel source in ethanol form, but only a handful of prototypes and conversions using specific wine-powered varieties exist. Maybe most well-known among the vino mobiles, so to speak, is the Aston Martin DB6 driven by Prince Charles of England. His little blue car was gifted to him by his mom, the Queen of England, on his 21st birthday and almost 40 years later, in 2008, the Aston Martin company helped convert it to run on fuel made from wine, called bioethanol. In 2011, the wine-powered car took newlyweds Prince William and Princess Kate on a post-nuptial spin for the crowds of fans and photographers [source: English].

Prince Charles logged up to a few hundred miles in the car each year after it was converted, and at about 10 miles per gallon, the car guzzles about four-and-a-half bottles of wine -- but emits an estimated 85 percent less carbon dioxide. The Prince's blue, biofuel classic is quite environmentally green. However, filling up the tank isn't just a matter of pouring in stock from the wine cellar. Converting wine to fuel involves some science, heat and careful handling [source: English].

How can a beverage made from grapes become fuel in the first place, and can it work in just any car with a few modifications?

How to Convert Wine into Fuel

Unlike many people who drink wine, so far, cars that run on bioethanol don't show a preference for red or white, type of grape or even country of origin. Most of the varieties converted to fuel have one thing in common: They are leftovers. Companies such as Green Fuels, who prepared the biofuel for Prince Charles' car, use wine produced at vineyards that can't be sold for consumption. Quotas set by the European Union, for example, limit the amount a winery can produce, and surplus amounts can be sold off for use in alternative fuels [source: English].

Making fuel from something safe and enjoyable to drink is a process similar to that of making grain alcohol or other super-strong moonshine concoctions. If the grapes have already been fermented into wine, the wine can be further distilled by boiling. High heats reduce the volume of liquid and preserve the more potent alcohol content to produce a form of ethanol. In the case of the Prince's Aston Martin, the fuel was about 85 percent ethanol combined with 15 percent petrol, or gasoline [source: Sample].

Although some contend that any car can be converted to run on wine-fuel, there aren't many out there to confirm this theory. Aside from the Aston Martin and a prototype, 270-horsepower model designed by Lotus, there aren't many highly publicized case studies to support widespread bioethanol production. Motors and engines for household machines also use the distilled wine- and even beer-powered technology, but this is a bit limited in scope, too [source: Stone].

Some inventors are finding ways to distill at home, which is a great way to use up waste and surplus from wine- and beer-making, but there is an issue with flammability, as has always been a risk since the days of making homebrew moonshine. Distilleries can be highly, highly flammable. Nonetheless, in the United States, it's legal to distill thousands of gallons of alcohol fuel on your own property as long as you secure a permit and promise to produce it in undrinkable, or denatured, form [source: Carpenter].

Although the fuel produced for Prince Charles's car was said to be more expensive than petroleum-based fuel, though not prohibitively so, the fact remains -- it takes a lot of grapes to make wine and even more distilled wine to make bioethanol. So let's toast to the idea and hope that someone comes up with a brilliant method for mass-producing wine fuel, or what could be called "vino-line."

I love the green and home-grown potential of converting wine to fuel, but I admit to picturing Lucy and Ethel (Ethel-nol, get it?) in the grape-stomping episode of "I Love Lucy" and can't really wrap my head around how many grapes it would take to ferment enough wine to distill into enough concentrated alcohol to power a lot of vehicles. I would be very interested in seeing a graphic representation comparing barrels of petroleum fuel to barrels or bottles of vino-fuel needed per car. That would be fascinating.