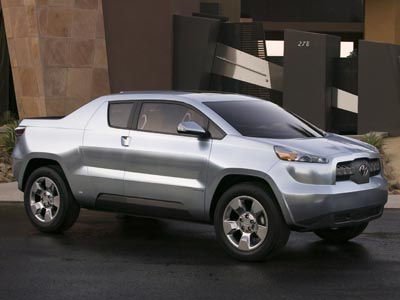 Toyota looks to shake things up in the pickup truck sector with the A-BAT, a gas-electric hybrid pickup truck that remains a close cousin to the Prius.­
Toyota

When you think of the word ­"hybrid," what kind of image pops into your head? Is it a small, sleek car that moves silently down the road, the type of tiny or mid-sized vehicle that most auto manufacturers design minimally, partly because of trends and partly because of fuel economy?

If you read about hybrid technology or have seen a hybrid vehicle driving down the road, then you know that these types of cars -- those with an electric motor and a gasoline engine inside -- are slightly smaller than most of the other cars you see every day. This is due to the fact that most manufacturers of hybrid vehicles really want to push the fuel efficiency angle in their design, and the less weight on a vehicle, the easier it is for the electric motor and gasoline engine to move it down the road.

So, chances are you probably weren't thinking of a pickup truck, were you? Although there have been a couple of attempts at introducing a hybrid truck concept into the auto market, including a hybrid version of the 2005 Silverado from General Motors, big trucks with an emphasis on fuel economy and hybrid technology simply aren't too visible.­

But Toyota, the same automaker behind the popular Prius hybrid car, has introduced a new hybrid truck called the Toyota A-BAT, which stands for "Advanced Breakthrough Aero Truck." The interesting new hybrid truck was developed at Cal­ty, the company's research facility located in Newport Beach, California. The mention of the Toyota Prius should come as no surprise -- the A-BAT has a similar look and feel to its smaller cousin, and you'll find much of the same technology under the truck's hood.

­But, of course, the A-BAT has a slightly different function than the Prius. While the Prius is meant for the everyday commuter who uses a car to get from one place to the next, the A-BAT has the ability to carry heavy loads. This might be especially enticing to eco-minded homeowners who are looking for a vehicle that has the space necessary for certain [home improvement projects. The added bonus is that the designers at Calty made the A-BAT with fuel economy and lower emissions in mind. This is the opposite of the image most people have in their heads when they think of the large utility vehicles currently on the road.

So what does Toyota have in store for the A-BAT? Read the next page to find out. 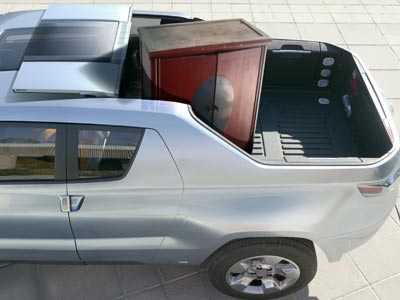 ­The A-BAT's exterior takes a lot of cues from the Toyota Prius, including its trapezoidal shape and streamlined design.­­
Toyota

As mentioned earlier, A-BAT stands for "Advanced Breakthrough Aero Truck," and on first glance the "Aero" part of that phrase might stand out. The A-BAT doesn't look like any of the older pickup trucks on the road, which typically have a triangularly shaped cabin and a flat, horizontal truck bed. Instead, the vehicle's design follows recent aerodynamic trends that you'll find on several newer pickup trucks, including the Honda Ridgeline and the Chevy Avalanche. In the A-BAT design, the exterior body panels that frame the edges of the rear cabin area don't fall straight down in a vertical line toward the bed of the truck -- instead, a narrow line continues and connects further down the bed, giving the truck an improved aerodynamic design by creating smoother air flow.

The designers at Calty specifically used what they call "Vibrant Clarity," Toyota's design ethos, when they drew up plans for the A-BAT. And if you placed a Toyota Prius next to the Toyota A-BAT, you'd notice they're using this philosophy often. The A-BAT and the Prius both share the same basic trapezoidal shape when you look at them from the side.

This unexpectedly long body design for a pickup truck might make it look as though there's no room in the A-BAT's cargo bed for transporting things, but the truck's interior is customizable for either more passengers or additional bed space. The inside begins as a four-person setup, and on the outside, a relatively small 4-foot (1.2-meter) bed; however, with a series of sliding platforms and an open tailgate the A-BAT can transform into a truck with a two-person cab and an 8-foot (2.4-meter) long truck bed. This means a long day of hauling 4 by 8 sheets of plywood back and forth is possible, but a camping trip with the whole family isn't out of the question, either. There's also a sliding roof panel that can move toward the front of the truck to accommodate taller objects, along with another sliding drawer underneath the truck bed for more storage. 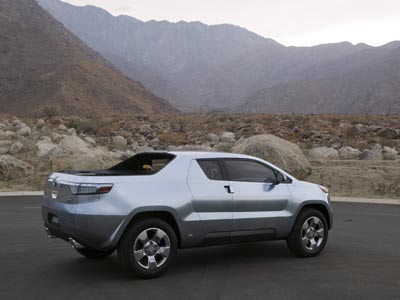 For more information about Toyota's A-BAT and other hybrid vehicle technology, truck on over to the links on the next page.