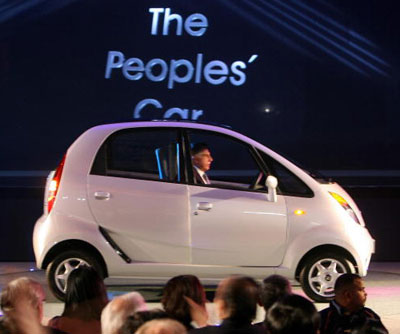 ­Most people spend­ years paying off their car loans. Many new cars cost tens ­of thousands of dollars, and interest rates can make financing a car expensive. But what if you could purchase a brand new car for about the same a­s just six months' rent? And by the way -- have you ever thought about moving to India?

One of the most anticipated cars of 2008 also turns out to be the cheapest car in the world. At only $2,500 before taxes, auto manufacturer Tata Motors' Nano will come to the streets of India by fall 2008. Ratan Tata, the chairman of the company that brought the tiny car to life, refers to the Nano as the "People's Car," and he wants to give those who might not be able to afford a new car the chance to take advantage of mobility. The company is marketing the affordable car to India's lower middle class, who only make about $200 a month [source: Time].

­Tata looks to accomplish the same thing Nicholas Negroponte did with the $100 laptop. By offering one of today's ubiquitous pieces of technology at a low price, Tata hopes to give everyone a fair chance at making a living, regardless of a person's economic background. But just like the laptop, the Nano is already receiving a fair deal of criticism. India already makes 1.3 million cars per year, and Business Week expects that number to grow 12 percent annually [source: Business Week]. With roads already suffering from excessive traffic congestion and pollution in cities contributing to global warming, the idea of more cars throughout India makes some people skeptical.

How fast will the Nano go? What kinds of emission standards does the vehicle meet? What did Tatan Motors do to offer the car for such a low price? If it's so cheap, will it be safer than the G-Wiz? Read the next page to find out. 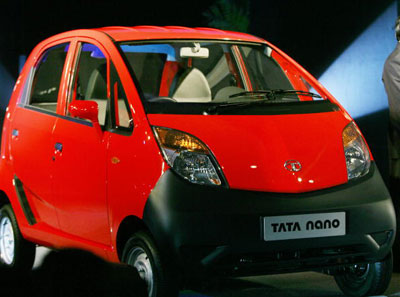 Although the Nano is only 8.5 feet long and 5 feet tall, the car can still fit five passengers.
Raveendran/AFP/Getty Images

One of the biggest trends in the auto industry is miniaturization. In order to minimize exterior space while keeping a car's interior roomy and comfortable for passengers and storage, carmakers are looking for innovative ways to combine electronics and free up as much space as possible. With a team of 500 engineers and designers and 34 new patents for the Nano, Tata Motors had this exact trend in mind -- the car is only about 10 feet (3.1 meters) long and 5 feet (1.6 meters) tall, but it still has four doors and can fit up to five people inside.

Tata took several steps to keep the car both affordable and reliable. Light yet strong steel is used for the car's body, and the tires are pushed to the far corners of the frame, creating the maximum amount of space on the inside.­ Super strong glue keeps the car together instead of traditional welding techniques, and small touches cut down on costs and weight -- the Nano has one windshield wiper instead of two, and the automakers hollowed out most of the steel from the steering column.

Ratan Tata poses in front of the Nano during its launch in New Delhi, India.
Raveendran/AFP/Getty Images

The engineers also took the working parts of the Nano into consideration when thinking about space. The 30-horsepower engine, gears and four-speed manual transmission are found in the back of the car, not the front, very much like that of the original Volkswagen Beetle -- this gives the Nano its boxier look. At 623-cc (cubic centimeters), the gasoline engine is smaller than typical car engine sizes, but still very efficient, reaching speeds up to 60 miles per hour. The company says the Nano should get up to 50 miles per gallon, excellent performance compared to most other cars. The United States, for instance, hopes to increase the industry average to only 35 miles per gallon by 2020, which makes the Nano look far ahead of its time.

The $2,500 price tag will only get you the most basic model of the Nano -- one with no air conditioning, for example. But the more expensive versions would only go up to about $4,000, which is still less expensive than the Suzuki Maruti 800, now the world's second-least expensive car. With all the cost-cutting, Tata Motors might not even make a profit with the Nano. Materials such as steel and rubber have risen in the past few years, but Ratan Tata is keeping his promise of the availability of a $2,500 car. Instead, future models and innovation hope to bring capital to the company -- its engineers hope to introduce new diesel version of the Nano by next year.

For lots more information on cars and new trends in the auto industry, read the next page.