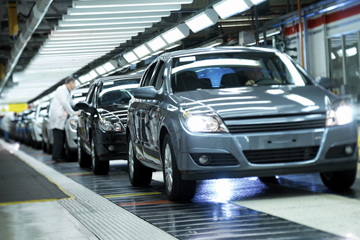 These days when a modern car rolls off the assembly line, it's covered with a primer coat, a base paint coat containing the pigment and a final protective layer known as a clear coat. Not all new cars come with a clear coat, but about 95 percent do [source: Meguiars]. The clear coat is really nothing more than an additional base coat without the pigment. Though car manufacturers have been using some kind of clear coating for decades, the clear coat used today became the norm in the early 1990s. You can check to see if your car has a clear coat on it by rubbing some wax onto your car with a white cotton rag. If the color of your car is on the cloth, then you probably don't have a clear coat.

Clear coats traditionally provide an extra shell layer of protection from the following:

Contrary to what many people believe, clear coat paint jobs need regular waxing and upkeep just like unprotected finishes. A single thin layer of wax every couple of months is generally recommended unless you demand a showroom shine at all times. In this case, you may want to go for a once-a-month wax.

Even though clear coats do a great job at protecting your finish from sun fading and oxidation, they are a little more scratch sensitive. Car manufacturers have been working on strengthening clear coats against surface damage for this reason. In 2003, Mercedes-Benz announced the invention of a "nano-partical" clear coat that offers scratch-resistant protection. The key was microscopic ceramic particles in the paint that harden in the paint shop oven. The company tested the finish in car washes and claimed a 40 percent improvement in paint gloss compared to traditional clear coats [source: Nanotechwire.com].

In September 2009, Toyota announced a new "self-repairing" clear coat finish that's poised to roll out on their new Lexus models. What makes it possible is a secret proprietary ingredient. Whatever this magic ingredient is, Toyota claims that it promotes a closer molecular bond within the paint. This makes it very dense, while improving its flexibility and elasticity. These characteristics make the coat less prone to damage from the sun's UV rays and acid from things like rain and bird droppings. The flexibility also allows minor surface blemishes to be self-restored. The new breakthrough requires no extra care to help protect the paint job from losing its luster and gloss.

How do I know when my tires need to be rotated?
Should I replace or repair my car?
What does the check engine light usually mean?