How can solar panels power a car?

by Cristen Conger
NEXT PAGE 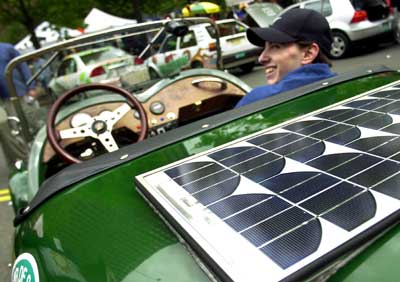 ­If there's no such thing as a free lunch, how about a free ride? Think of how wond­erful it would be if your car could continue running without you spending a dime on fuel. If you drove a solar-powered car, that auto dream would come true. Much like solar-powered homes, solar cars harness energy from the sun, converting it into electricity. That electricity then fuels the battery that runs the car's motor. Instead of using a battery, some solar cars direct the power straight to an electric motor.

Solar cars can accomplish this through photovoltaic cells (PVC). PVCs are the components in solar paneling that convert the sun's energy to electricity. They're made up of semiconductors, usually made of silicon, that absorb the light. The sunlight's energy then frees electrons in the semiconductors, creating a flow of electrons. That flow generates the electricity that powers the battery or the specialized car motor in solar cars. For more details about solar energy, read How Solar Cells Work.

Although you won't find solar cars at any dealerships, people have been building their own models since the 1970s. Ed Passerini who constructed his own completely solar powered car called the "Bluebird" in 1977 and Larry Perkins who drove the "Quiet Achiever" in 1982 both receive nods as the first people to do so. Ford and Mazda have even tested the waters with solar hybrid concept cars. The 2006 Ford Reflex installed solar panels in the headlights, and the 2005 Mazda Senku featured solar panels on its roof to help charge its battery. The 2008 Cadillac Provoq uses solar panels to power accessories, such as interior lights and the audio system.

While the Reflex, Provoq and Senku are merely concept models, cars outfitted with solar panels may be tiptoeing their way into the consumer automotive industry as companies try to find innovative methods for dodging gasoline dependence. French car company Venturi has made one of the most publicized efforts with its unveiling of the Eclectic model prototype at the 2006 Paris Auto Show. The Eclectic combines solar, wind and battery power to run a three-passenger car specifically for city driving. Solar panels cover its roof, and a wind turbine can also catch energy on blustery days. The Venturi Eclectic isn't cut for highway travel, however, since it only goes up to 30 miles per hour (48 kph).

That brings up the question of how practical solar-powered automobiles are. We'll steer toward that topic on the next page.