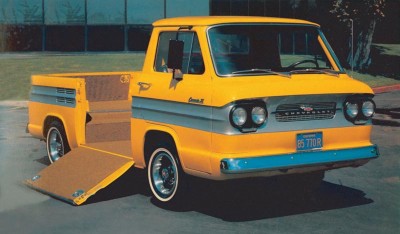 Chevrolet's 1962 Corvair Rampside pickup was particularly well suited to hauling small, wheeled implements that could be rolled up into the bed. See more classic truck pictures.

With the 1962 Chevrolet Corvair Truck -- and with the other truck versions of its rear-engine, air-cooled Corvair compact car -- it's no doubt what Chevrolet was aiming at: the Volkswagen's Beetle-based bus.

To VW's passenger-carrier Microbus, Corvair replied with the Greenbrier; against VW's cargo vans, Chevrolet set the Corvan; rivaling VW's open-bed bus pickups was the novel Rampside, with its neat, fold-down ramp for easy loading and unloading.

Compared to the Volkswagen rivals, these Corvair workhorses were larger, faster, far more fun to drive -- and warm in winter. The VWs, after all, were air-cooled machines that relied on a fresh-air heater without fan boost, barely adequate in the Beetle and totally lost in a van.

Also, as time went on, Corvair developed horsepower options and performance gearboxes. A 1964 Corvan with 110 horsepower and the four-speed was a marvelous toy, and the nearest any 1960s truck came to sporty handling.

Until, that is, you experienced the early Corvair's total and irrevocable oversteer: the tendency to spin out in turns because of its rear-engine weight bias and particular rear-suspension design. Driven too fast with an unloaded bed, the truck versions could suffer the same flaw, especially if the owner didn't follow tire-inflation instructions to the letter.

The Series 95 Corvair truck and Greenbrier mini-bus began production in 1961 and changed little. The 1962 Greenbrier gained a Deluxe version with chrome bumpers, grille and hubcaps, and color-keyed interior. Greenbriers cost less than $2,700 and offered 175 cubic feet of cargo space.

The most desirable Corvair truck is the Rampside pickup with its fold-down sides and streamlined, squared-off cabin. A Loadside pickup with a conventional tailgate also was built for 1961 and 1962.

Although they helped start the trend toward vans, were ultra-low and fun on curves, Corvair trucks were no more successful against Ford's rival Econoline than the Corvair had been against the Falcon. One problem was the bi-level floor, required to house an engine in the rear.

In addition to the novel side loading ramp, the 1962 Corvair Rampside pickups had a conventional tailgate above the rear-mounted engine.