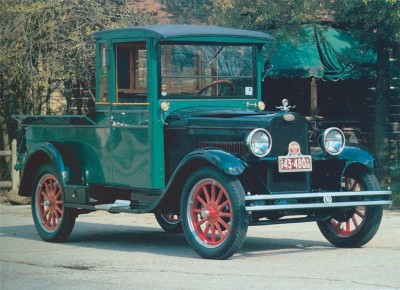 By the time the 1928 Chevrolet pickup was introduced, Chevrolet had been in the truck business for ten years and was handily outproducing Ford (which was just completing its lengthy switch from Model T to Model A).

The object, as in the passenger car sales battle, was always to head off Ford -- the rivalry had developed in the Teens, and by the mid-1920s the two producers were neck and neck. Chevy trucks had begun in 1918 as modest half- and one-ton models based on the 490 passenger car, riding a 102-inch wheelbase.

Chevrolet supplied the chassis and drivetrain, cowl, fenders and hood, plus whatever accessories the customer required. This set a pattern which was still in effect when the 1928 Chevrolet pickup appeared.

Mechanically, the four-cylinder engine was improved with higher compression ratio (4.5:1), larger valves, greater valve lift and a two-piece exhaust manifold. Though this had not raised horsepower, which was still 35, it did improve torque and responsiveness.

The basic National chassis retailed for $495, and several body styles other than the pickup were listed. These included a sedan delivery, and even a hearse and ambulance by Henney.

The 1928 Chevrolet pickup's spare tire was mounted around a sliding rear window.

Even the more conventional bodies were not yet built by Chevrolet, so most sales were for the bare chassis. Dealers often ordered bodies and sold the truck complete, but the buyer could still choose a non-standard body maker if desired, and many did just that.

Collectible Pluses of the 1928 Chevrolet Pickup

Collectible Minuses of the 1928 Chevrolet Pickup