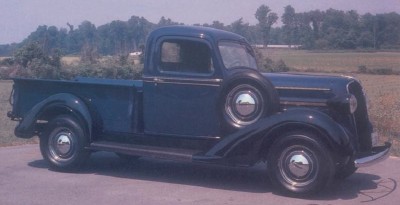 Looking much like the Dodge offering of the same period, this 1937 Plymouth PT-50 half-ton pickup cost less than the Dodge new but is worth more now. See more classic truck pictures.

Plymouth, the division of Chrysler that started in 1928 and was shut down in 2001, was never known for trucks. It built trucks for such a short period -- from 1935 to 1942 -- and only dabbled in them again with the easy-to-forget Trail Duster front-wheel-drive car-pickup in the mid 1970s.

Most 1935-1942 Plymouth trucks were pickups, though there was also a Commercial Sedan sedan delivery and a Westchester Suburban, which was a woody wagon rather than a truck, but was included in the commercial line because it used the truck chassis.

Plymouth also sold a bare truck chassis, to be equipped with bodies from outside suppliers, accommodating payloads of up to one ton. Only 158 of these chassis were sold in 1937, priced at $495 ($395 without the cab, though only 11 of those were built).

The 1937 Plymouth PT-50 half-ton pickup, which cost $525, was by far the most popular 1937 Plymouth truck. Nearly 11,000 were built for the model year. Standard equipment included safety glass all around, a spare wheel nestled in the right front fender, and a six-foot-long pickup box, about four feet wide.

Power for the 1937 Plymouth PT-50 half-ton pickup came from the Plymouth L-head six with 70 horsepower. The three-speed floor-mounted transmission had silent helical gears in second speed.

Fenders were ordinarily painted black, but could be ordered in the body color. The sedan delivery version cost $140 more than the pickup, and included chrome bumpers front and rear as standard. At that price it was not the hottest seller, accounting for only 3,256 units.