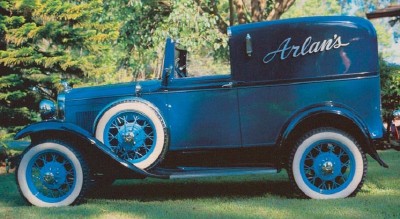 Superficially identical to the early 1928-1929 Ford Model A/AA trucks, the 1930-1931 Ford Model A trucks were changed considerably under the skin.

As in past years, the factory offered a comprehensive selection of commercial bodies for the 1930-1931 Ford Model A truck. The most popular and practical versions of the were the fully enclosed Ford DeLuxe panel delivery and the closed-cab pickup.

But no iteration of the 1930-1931 Ford Model A truck was prettier than the Town Car Delivery. Offered for only two years, the Town Car Delivery was a close-coupled, foreshortened panel truck with an aluminum body and an open driver's compartment that could be protected by a soft roof in inclement weather.

It could do 60 mph, had a modern gearbox and electrical system, and stopped much better with mechanical brakes on all four wheels instead of two.

Ford trucks packed more value for money than just about any others on the road, and Ford led Chevrolet in production from 1929 through 1931. Unfortunately, the Depression was deepening, and sales were dropping alarmingly. From 1.5 million units in 1929, production of Model A-based trucks slipped to just a third of that total in 1931.

Rumors in the trade for most of the year suggested that Henry Ford was working on a V-8 to go one-up on Chevrolet's six. Some said it would be put in a new truck line to replace the faltering Model A-based series.

Finally, on July 29, 1931, Ford laid off 75,000 workers and closed 25 of his 36 U.S. factories until sales showed some improvement. Privately, the wily auto baron knew it was all over for four-cylinder cars and trucks, and was well along with the Model A's replacement.

This 1931 Ford Model A Deluxe Pickup was considered rakish in its day. This example boasts a smooth-sided cargo bed with chromed railings.