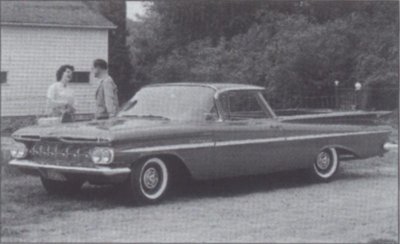 General Motors liked to be first with new vehicle concepts in the 1950s, But there's no getting around the fact that by the time it rolled out the 1959 Chevrolet El Camino "sedan pickup," arch-rival Ford had already been building its similar Ranchero for two years. (That must have been somewhat galling, considering Chevrolet's truck design studio had explored a sedan pickup as early as 1952.)

Both the Ranchero and El Camino were pioneering examples of what are now dubbed "crossovers," vehicles that attempt to appeal to both car and truck customers with a mixed bag of creature comforts and utility features.

Before delving into origins, though, we need to address the question just what is a sedan pickup? For purposes of this article, consider it to be a utility vehicle built on a passenger-car chassis, with passenger-car frontal and cabin styling, and -- this is key -- a cargo box seamlessly integrated into the passenger-car design elements.

Thus, early pickups based on passenger-car chassis don't qualify. Nor do coupe models equipped with a pickup box in the deck opening, such as Chevrolet's own 1936-1942 Coupe-Pickup. The 1937-1939 Studebaker Coupe-Express and Hudson pickups of the 1930s and 1940s are also excluded, due to their distinctly separate cargo boxes.

There are antecedents to the Ranchero and El Camino, however. GM, Ford, and other automakers manufactured and marketed "utility" coupe-pickup models in Australia as early as the mid 1930s. These Aussie "utes" typically combined the styling of a five-window coupe body with an integrated pickup box. (GM's export organization offered a Chevrolet utility as late as 1952, and GM's Australian Holden model line continues to feature a distinctly El Camino-like "ute.")

Chevrolet's truly stylish Cameo Carrier pickup, introduced in mid 1955, also helped pave the way for the El Camino. Although a truck in every sense, the Cameo offered an unprecedented array of car-like features. Two-tone paint, smooth V-8 power, an automatic transmission, a relatively luxurious interior, power assists, and more were among its attractions.

The Cameo Carrier's genesis can be found in design exercises executed in the early 1950s by a talented and enthusiastic young stylist in the GM truck design group. His name was Charles M. "Chuck" Jordan, and he was destined to retire from GM in 1992 as its fourth vice president of design.

One of Jordan's early renderings for GM showed a 1952 Chevrolet passenger car with an integrated pickup box. Jordan recalls that the design sketch resulted from a discussion with GM's legendary design chief, Harley Earl. It was Earl, Jordan says, who suggested, "taking the Chevrolet passenger-car sedan and making a deluxe pickup out of it."

But Jordan says that his 1952 drawing had no direct connection to the original El Camino; he had already been named chief designer in the Cadillac studio by the time the 1959 Chevrolet styling program got under way. (The drawing was, however, the first in a chain of luxury pickup explorations that led up to Jordan's design for the Cameo Carrier.) Jordan also recalls there was a later sketch done of a passenger-car pickup based on the 1955 Chevrolet design.

The Cameo no doubt inspired Dodge, International, and Ford to offer flush-side cargo boxes on some of their 1957 pickups. But Ford had another surprise in store for the competition in 1957. It was, of course, the Ranchero.

In the next section, learn how -- and when -- Chevrolet countered its rival's "surprise."