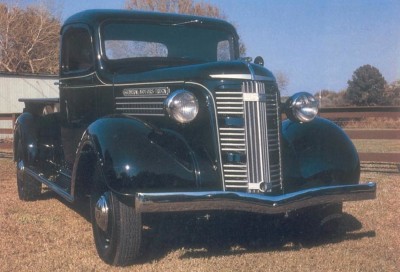 With styling influenced by the art-deco design movement of the 1930s, the 1937 GMC pickup combined elegance with functionality.

The GMC marque dates to 1912, when General Motors merged two of its recent acquisitions, the Rapid and Reliance truck manufacturers, to form GMC Truck. (In an interesting side note, Rapid had been founded in 1902 by one Max Grabowsky, so the letters also echo "Grabowsky Motor Co.")

Generally, GMC built a broader line of trucks than Chevrolet, which leaned toward light- and medium-duty models. GMC did build a nice array of pickups, however, and they tended to cost more and be better equipped than equivalent Chevrolets.

The 1937 GMC pickup was beautifully styled in the art-deco manner and was the first GMC that could truly be called streamlined. The barrel-shaped grille was composed of horizontal bars with a vertical-bar central section, and the grille theme was repeated along the hood sides.

A one-piece windshield and a handsomely dipped front bumper completed the effect. This design remained in production with few changes through 1939.

Collectible Pluses of the 1937 GMC Pickup

Collectible Minuses of the 1937 GMC Pickup

An intricate grille pattern and streamlined cues link the 1937 GMC pickup to the art deco movement.