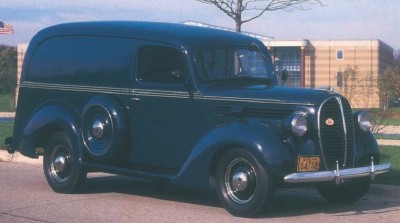 The 1938-1939 Ford panel and pickup truck bore little resemblance to the Ford trucks that had come before. They were treated to a thorough restyle in 1938, and carried over unchanged into 1939.

Though the antiquated chassis was little changed, half-tonners were reskinned, with an oval barrel-shaped grille that resembled certain Chrysler products. A more spacious cab, larger cargo box, and longer car-like fenders were part of the1938-1939 Ford panel and pickup truck revamp.

The pretty 1938 Ford pickup was the cheapest truck in the line at $590. A 1939 can be distinguished from a 1938 by its smaller V-8 insignia on hubcaps, crinkle-finish interior door panels, and black spare-tire hubcap; the 1938's was stainless steel.

The big news in 1939 was only important because so much time had gone by since it should have been adopted -- hydraulic brakes, which answered longstanding criticism of the Ford trucks' stopping ability.

Long offered on most competitors, hydraulic brakes were a new addition to 1939 Ford trucks, including this 1939 Ford pickup.

Henry Ford had resisted a change from the tried-but-untrue mechanical brakes for 11 years -- ever since Plymouth had introduced them in the low-priced field. Work on the new brakes had begun in 1938, but Henry suffered a stroke soon afterward and would play a diminished role in product development.

Many years had passed since Henry declared you could have any color as long as it was black: the 1939 Ford panel and pickup trucks could be ordered in vermilion, black, blue, Dartmouth green with a cream stripe, maroon, Gull gray, and Folkstone (darker) gray with a red stripe.

Collectible Pluses of the 1938-1939 Ford Panel and Pickup

Collectible Minuses of the 1938-1939 Ford Panel and Pickup

The highly collectible 1939 Ford pickup had a roomier cabin with a hot-water heater to replace the inefficient fresh-air heater.