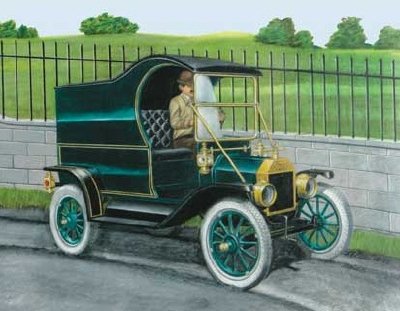 What would quickly become one of the world's largest automobile manufacturers got its start on June 16, 1903, when Henry Ford and his associates founded the Ford Motor Company.

With sales of cars booming, Henry Ford had little reason to enter the commercial market, but he did make a few attempts to produce specialized vehicles during the early part of the century.

The first example, based on a Model C Ford, was introduced in 1905. Called the Ford Delivery Car, its $950 price attracted few buyers, and less than a dozen were built before production ceased.

Ford's second attempt at a commercial vehicle was called the Ford Delivery Van. Arriving in 1907, it was based on the four-cylinder Model N car introduced the previous year. Unfortunately, it only lasted about as long as its predecessor -- and sold about as many copies.

Yet neither of these failures deterred Henry Ford from trying to establish a niche in the automotive world for his company and its products. And he would carve out more than just a niche with what would become one of the most famous and successful cars of all time: the Model T.

Introduced in October 1908 as a 1909 model, the venerable Model T was hardly revolutionary, being based heavily on the three-year-old Model N. But it struck a chord with buyers, its simple, reliable design being offered in a range of body styles with seating for two or five passengers.

Furthermore, Ford dropped its previous four car lines to concentrate on the T, which allowed for increased production. And with that, Henry Ford was on his way to becoming an automotive icon.

Learn how Ford paved the road for more than 100 years of truck-making in the next section.