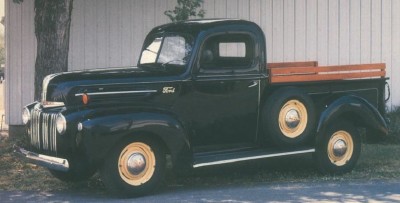 ­Looking less car-like than its predecessors, the 1942-1947 Ford half-ton pickup had a stronger frame and a more modern suspension and driveline. See more classic truck pictures.­

Light-duty Ford trucks in 1942 drifted from the car-derived stying that made the 1940-1941 blue-oval trucks among the most highly regarded in history. For 1942, the front clip was redesigned along flatter, more contemporary lines. The prow-shaped grille was replaced by a distinctive waterfall type.

Headlamps were completely faired in and mounted inboard of fender-end parking lights, while a heavy hood molding and side hood louvers were adopted. Door handles and headlight bezels started off chromed, but became painted toward the end of the abbreviated civilian model run, which ended in February 1942.

This basic body was revived after World War II, but changes were few through 1947. Self-centering brakes became standard in 1946 Ford half-ton models, which came only with a 239-cid V-8 or the six.

Stake and pickup bodies were built in 1945, but from 1946 a sedan delivery, and half- and one-ton panel trucks were added. Wheels were black on 1942-1947 Ford half-ton pickup models, but only the prewar trucks offered pinstriping.