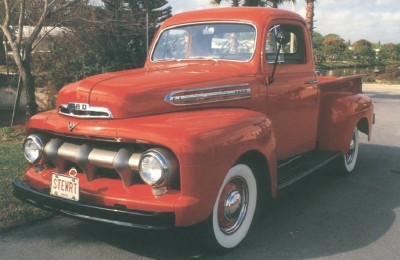 The 1951 Ford pickup sported a new grille with a "toothy" single-bar design. The look would carry on with minor revisions through 1956. See more classic truck pictures.

The 1951 Ford pickup was a pivotal member of Ford's "Bonus Built" line of postwar trucks. The line was announced early in 1948 and ran through 1952. it was the broadest roster in Ford truck history, spanning vehicles from half-ton pickups to three-ton commercial haulers.

Featured were a "Million Dollar Cab" (it cost $1 million to design and tool). Ford said it had "Living-Room" comfort, and it was much higher and wider than before, and better fitted. Styling was classier and cleaner, and the Ford six and V-8 engines were available.

The 1951 Ford pickup also introduced a new front end. Gone was a smiling horizontal-bar grille and inboard headlamps, replaced by a single-bar grille with three massive "teeth." Along with a wraparound front bumper, this gave Ford trucks a more aggressive frontal appearance.

Fenders of the 1951 Ford pickup were revised to house this new grillework, and headlamps moved farther outboard. Being somewhat taller, those fenders allowed the hood to adopt a flatter, more modern appearance.

Ford accentuated this smoother look with a low air scoop in the lower front of the hood, replacing the high "nostrils" of the 1948-1950 design.

New "Power Pilot" vacuum advance adjusted spark and fuel mixture according to load weight, and the V-8 engine earned a number of mechanical modifications. Out back, the 1951 Ford pickup featured a "grain-tight" tailgate, meaning that it fit so snugly a load of grain wouldn't leak on the way home.