Chrysler Corporation likes to boast that its 1984 Dodge Caravan/Plymouth Voyager pioneered the minivan concept, but that's only true of front-wheel-drive designs. The real originator was Volkswagen, which had sold rear-drive minivans since the early 1950s in the Beetle-based Type 2 Microbus (through 1979) and the later Vanagon.

There was also Chevrolet, which had imitated VW for 1961 with a trio of trucks derived from its compact Corvair, another air-cooled rear-engine car. Besides a novel pickup called Rampside, Chevy offered Corvan commercial and Greenbrier passenger vans remarkably similar in size and shape to the Chrysler models of nearly a quarter-century later.

That same year, 1961, Ford trotted out a group of Falcon-based compact trucks called Econoline: initially a pickup, commercial van, and windowed passenger van. All had conventional rear drive and boxy "cab-over-engine" bodywork like the VWs and Chevys, but hewed to orthodoxy with water-cooled six-cylinder engines mounted in front.

Simple and reliable, Econoline sold well from the first, easily outpacing the more trouble-prone Corvan/Greenbrier. It also outlasted them in the marketplace. Almost predictably, though, Econoline grew quite a bit larger when first redesigned for 1968.

Then again, the truck market itself was growing -- and subdividing, just as automotive classes had done with compacts, intermediates, and personal-luxury models. When buyers began clamoring for utility vehicles in the image of the wartime Jeep, Ford obliged them with the Bronco for 1966.

Meanwhile, custom vans had become the rage with many younger people of the "hippie" stripe, and commercial users were demanding bigger, heftier vans as well as pickups. That set Ford to working on an even larger Econoline. Developed as project "Nantucket," this third-generation design was pretty much locked up by 1972. Introduction was slated for model-year 1975.

But something else was afoot, or so thought one Lido Anthony Iacocca, the former super-salesman from Pennsylvania who had fast climbed the ladder at Ford Motor Company to become its president in 1970.

That presidency was partly his reward for "fathering" the original Mustang ponycar and some newer Dearborn winners. Of course, Iacocca wasn't solely responsible for the Mustang's huge success, as he (and others) liked to claim, but he could spot emerging market trends.

Learn more about Iacocca's ideas for a minivan by continuing to the next page.

The sliding passenger-side door and slanted B-pillar are seen in this October 1972 sketch of the Ford Carousel minivan concept car.
©2007 Publications International, Ltd.

Among Lee Iacocca's first tasks after he took over as Ford president in 1970 was  the 1972 Ford Carousel minivan concept car development program. With vans bigger than ever, in popularity as well as size, Iacocca began wondering whether there might be a market for something smaller and less "trucky" -- in other words, a more maneuverable "carlike" van.

Suitably priced, it could have great appeal to "vannies" and smaller families for camping and other recreational uses, as well as a light-duty urban commercial. For some buyers, this "minivan" might even be a roomier, more versatile alternative to the traditional station wagon.

Accordingly, Iacocca approved development of what came to be called the Carousel. Conceived as a more compact "garageable van," it was planned around dimensions that harked back to the first Econoline, plus, at first, an all-new drivetrain.

But cost concerns soon prompted changing the concept to essentially a cut-down version of the just-completed Nantucket, with most of its innards but different outer sheetmetal and more carlike amenities.

The revised approach offered benefits apart from reducing development time and tooling costs, not to mention retail price. Cutting down Nantucket's inner body and ladder-type frame promised a very strong, rigid platform; the separate chassis, combined with a heavily insulated floorpan and thick bushings beneath driveline and body, promised a quiet vehicle without the unpleasant rough-road "drumming" that marred so many unit-construction cars.

Of course, front-wheel drive never figured in the equation. At the time, the configuration was not yet fashionable for Detroit cars, let alone trucks. Even today it's sometimes deemed undesirable compared to rear-drive because it tends to limit towing ability, an important consideration for many truck buyers. That benefit helps underpin the demand for sport-utility vehicles based on rear-drive truck chassis.

Learn about the Carousel's styling on the next page.

Striving to avoid the "school bus look" typical of contemporary big vans, he penned a glassy roofline not unlike that of Chevy's classic mid-1950s Nomad wagon, with slanted B-posts, thin C-pillars, and three windows per side: one for each front door and two behind. The rearmost panes curved slightly around the back to meet modest D-posts, matched by wrapped, tri-color vertical taillamps.

Ribbed appliqués in a dark charcoal color adorned lower body and tailgate to respectively lower and widen appearance, though they would have been omitted on the woody-look "Squire" version that Ford marketers wanted. The tailgate itself was a drop-down wagon-style affair with retracting window.

Some Carousel sketches furthered the Nomad look with a slight roof-panel "step-down" behind the B-posts; etched with slim longitudinal lines, it was the natural spot for an optional luggage rack. Up-front ideas involved variations on Ford's then-favored "power dome" hood theme, with four round headlights in separate square bezels astride big, mostly rectangular grilles.

Like Nantucket but not earlier Econolines, the Carousel had a definite, if stubby nose. This allowed the engine to sit farther forward, which opened up extra space and lessened noise inside.

Ford president Lee Iacocca, who spearheaded the Carousel effort, also wanted the protruding front sheetmetal as a "crumple zone" for absorbing energy in collisions -- a sales plus for the safety-minded (including, one presumes, the likes of Ralph Nader).

A Nesbitt rendering of the Carousel from November 1972
©2007 Publications International, Ltd.

As was becoming de rigeur for vans, a sliding right-rear door provided access to Carousel's rear compartment, for which there was no shortage of ideas. Nesbitt later recalled that one of the more striking proposals was a U-shaped "lounge" formed by a rear-facing bench behind the front cabin and an inward-facing bench along each side wall. Individual "captain's chairs" seated driver and front passenger.

After weeks of what Nesbitt described as "frantic effort," the Carousel was ready for management review in November 1972: a full-size clay with Squire-type side trim and conventional front-facing second and third bench seats. Iacocca, product-planning whiz Hal Sperlich, and even chairman Henry Ford II were all impressed enough to approve construction of a running metal-bodied prototype for production engineering purposes.

To find out why the Carousel never made it to showrooms, keep reading on the next page. 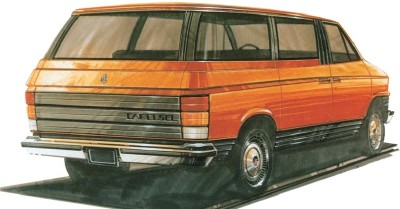