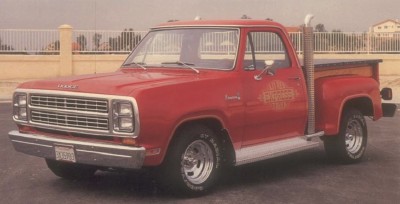 The 1978-1979 Dodge Li'l Red Truck was a sassy little performance number made possible by a regulatory loophole.

When Dodge discovered that Environmental Protection Agency regulations allowed light trucks of over 6,100 pounds Gross Vehicle Weight to run with no smog gear at all, it set about creating what some consider the original muscle pickup.

Despite its humble origin -- a very basic Dodge D150 pickup with a narrow box and shorty 115-inch wheelbase -- the Dodge Li'l Red Truck was an impressive package. For about $5,000, a customer got the high-line Adventurer cab in red or black, with bench or bucket seats.

From there, the buyer could personalize with extra gauges, including a tachometer, various sound systems, including eight-track tape or CB, and a "Tuff" steering wheel right out of the old Dodge Challenger R/T muscle car.

The 1978-1979 Dodge Li'l Red Truck came only in Canyon Red set off by bold gold decals on doors and tailgate, plus genuine varnished oak planking on box sides, tailgate, and bed floor.

But the real killer was that pair of tall, 2.5-inch-thick chrome exhaust pipes poking up through the step plates behind the cab. Wrapped in perforated metal heat shields, they looked like they'd been swiped from a Kenworth 18-wheeler.

Those stacks led straight to a 360-cubic-inch V-8, tuned as if smog regs didn't exist. Essentially, it was the E58 police unit (E for "Express," hence the name on the doors), sans "Lean Burn" and emissions hardware but fortified with a free-breathing Holley four-barrel carburetor, twin-snorkel fresh-air induction, beefed-up internals, and heavy-duty electrical.

End result: 225 horsepower and a thumping 295 lbs/ft of torque at 3200 rpm. Completing the performance picture were a three-speed Leaflet automatic transmission, 3.55:1 differential, stiff springs and shocks, and LR60-15 white-letter radials on eight-inch wheels.