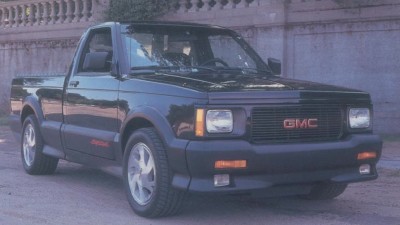 The 1991-1992 GMC Syclone was based on GMC's regular-cab compact Sonoma pickup. It had a 108.3-inch wheelbase and a six-foot cargo box. Sonoma engine choices ranged from a mild four-cylinder to the 160-bhp 4.3-liter EFI Vortec V-6.

The 1991-1992 GMC Syclone used the Vortec V-6, then added a liquid-intercooled turbocharger with 14-psi boost, 8.35:1 compression, port injectors, special pistons, oil cooler, and dual exhaust outlets. That yielded a rousing 280 horsepower at 4400 rpm and 350 lbs/ft of torque at 3600. A four-speed automatic was the only transmission.

A special "sport-calibrated" suspension lowered the ride height by two inches compared to the regular Sonoma's. Up front were independent low-rate torsion bars and a thick stabilizer bar; a solid axle on semi-elliptic springs held up the rear. Bilstein gas shocks were mounted, and tires were meaty P245/50VR-16 Firestone Firehawks on turbine aluminum wheels.

­GMC said the Syclone had "the first four-wheel anti-lock braking system ever available on a pickup truck," though rear brakes were drums, not discs.

The 1991-1992 GMC Syclone looked the business. It came only in black, with matte-black aero-trim on the lower body and racy red "Syclone" insignia. Inside were contoured buckets, floor shift, leather-wrapped tilt wheel, and big analog instruments, including a tach and turbo boost gauge.

Air conditioning, stereo cassette, cruise control, tinted glass, and a host of power accessories were standard. So was the handsome Lexxus TruxCover tonneau cover for the cargo bed.