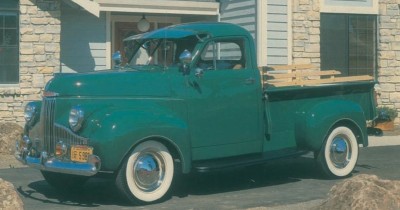 Studebaker returned to true-truck production in 1941 with a clever design that survived after the war in the form of the 1947 Studebaker M-5 Coupe Express pictured here. See more classic truck pictures.

Studebaker in 1941 had rocketed back into the truck business it had temporarily abandoned. It fielded the M5 family of trucks, a broad line of 1/2- to 1 1/2-ton models. Spanning 113- to 195-inch wheelbases, these offerings had 90 percent of the truck market covered.

The truck rebirth was built on profits from the Studebaker Champion car, which had rescued the company beginning in 1939.

The half-ton M-5 pickup was called the Coupe Express. Far different from the 1937-1939 car-based Coupe-Express models, it was a genuine truck. But in a clever bit of design engineering, the Studebaker M-5 Coupe Express shared many components with Studebaker's passenger cars, thus greatly reducing tooling costs.

Underhood was the Champion's 170-cid L-head six, with 80 bhp. The dashboard was Champion, as were some body panels, headlamp rims, and the steering wheel. Hubcaps were borrowed from the Commander.

Base Studebaker M-5 Coupe Express pickups were relatively spartan, like most trucks of the day. But for around $25, the DeLuxe Equipment Group added brightwork on the grille and hood, a chrome driver's mirror, hood ornament, body-color (instead of black) fenders, and an interior light.

The 1947 Studebaker M-5 Coupe Express listed for $1,082. Changes over the prewar models were minor, but a spare tire was now included and the options list expanded modestly. A hood ornament was standard from mid-1947; previously, it had cost $4.75 extra.

The Studebaker M-5 Coupe Express was virtually unchanged in 1948 because it was scheduled to be discontinued in favor of a new postwar design in March of that year.

A chrome rear bumper and whitewall tires were among the options for the strong-selling 1947 Studebaker M-5 Coupe Express pickup truck.