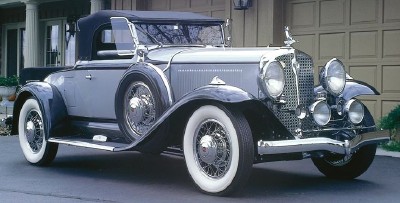 The President, shown here as a 1931 model very similar to the 1930 original, was the finest car Studebaker made in the 1930s.

Studebaker was born in 1852 when brothers Henry and Clem built three covered wagons in South Bend, Indiana. Actually there were five Studebaker brothers, all of whom participated in company affairs over the years. By 1872, Studebaker was the largest horse-drawn vehicle manufacturer in the world.

J.M. "Wheelbarrow Johnny" was president in 1902 when Studebaker began building automobiles. The first were electrics, soon joined (and later replaced) by gas-powered models. Albert Russell Erskine, a one-time company accountant, ran the company from 1915 to 1933.

Erskine liked to say "I eat obstacles for breakfast." His energy, optimism, and efficiency multiplied Studebaker's sales and profits. The company was quite successful in the medium-price field, but Erskine wanted to expand both down- and upmarket. In 1927, a light six (dubbed Erskine) gave Studebaker a presence in low-priced field. Pierce-Arrow was acquired in '28 and gave Studebaker a strong entry in the luxury market.

Studebaker fared poorly after the 1929 stock market crash. Albert Erskine's optimism worked against him during the Depression. Instead of conserving cash reserves, he paid large dividends to Studebaker shareholders, expecting the economy to recover soon. The Depression only deepened and Erskine's policies put the company in a precarious position.

The Erskine car was a weak performer and sold poorly. It became the Studebaker Model 53 Six during 1930. Having failed with his namesake car, A.R. Erskine tried again with another low-priced "companion," the Rockne, named for then-famous Notre Dame football coach Knute Rockne.

This car didn't last as long as the Erskine, with just over 36,000 built in 1932-33. At $585-$735, the Rockne should have sold well in those deep Depression years, but a lack of power was a handicap, compounded by iffy workmanship. Yet another Erskine error was selling a Studebaker called Dictator. The name seemed downright unpatriotic as real-life dictators Hitler and Mussolini consolidated their power, yet it persisted through 1937.

At the top were magnificent President Eights, offered on both a 125-inch-wheelbase chassis and a ­special 135-inch platform. These were the finest automobiles South Bend built in this decade -- perhaps the best ever.