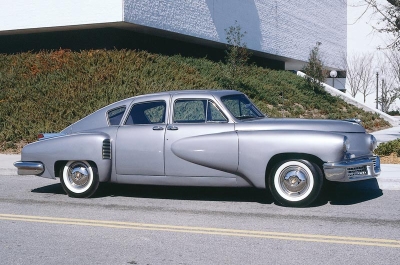 The 1948 Tucker Torpedo was remarkably innovative, but only 50 cars were ever produced.

Preston Thomas Tucker was an ebullient, 200-pound, six-footer who dreamed big and could raise big money -- fast. He was an industry veteran with sales experience at Stude­baker, Dodge, and elsewhere, and an inveterate entrepreneur who secured financing from Henry Ford to build Indy race cars in 1935. He also built a high-speed military scout car in 1937. In 1948, Tucker surprised everyone with "The Most Completely New Car in Fifty Years."

New it was. A torpedo-shaped fastback four-door sedan, the Tucker "48" looked just like the "car of the future" long expected by war-weary Americans. Styled by the forward-thinking Alex Tremulis on a 128-inch wheelbase, it was 219 inches long but only 60 inches high -- low for the day. Engineering broke just as sharply from Detroit convention, with all-independent suspension and a rear-mounted flat-six. The latter derived from a war­time air-cooled helicopter unit, but boasted a fully sealed water-cooling system -- an industry first. Horsepower was 166 and torque a thumping 372 pound-feet from 335 cubic inches, yet the all-alloy powerplant weighed just 320 pounds. The chassis was a sturdy box-­section perimeter type with a subframe at each end.

Lack of time, money, and even technology precluded a curved windshield, disc brakes, "Torsilastic" rubber springs, and other innovations proposed by Preston. But the car still had novelties aplenty: central "cyclops-eye" headlight that turned with the front wheels, doors cut into the roof to ease entry/exit, a roomy six-passenger cabin with "step-down" floor, and interchangeable front/rear seats (to even out upholstery wear). Safety features abounded, too, and included massive bumpers; recessed or protected knobs, buttons, and levers; windshield glass that popped out harmlessly on impact; and a "Safety Chamber" where front passengers could dive "in case of impending collision."

Despite its size and 4,200 pounds of heft, the Tucker could manage the 0-60 mph sprint in about 10 seconds. Top speed was at least 120 mph, thanks to the aerodynamic styling with an estimated drag factor of 0.30 -- good even today. Factory tests showed a creditable 20 mpg at a steady 50-55 mph. Just as nice, the rear-engine layout, all-independent suspension, and center-point steering combined for surprisingly easy handling and secure roadholding.

The Tucker would probably have sold well despite a Cadillac-like projected price of some $4,000. But production ended at only 50 cars, plus the famous "Tin Goose" prototype. All were built before August 1948, the last 37 on a short assembly line in a refurbished wartime Dodge plant on Chicago's South Side.

Preston always claimed the Tucker was too good to live, and evidence suggests that the Detroit establishment felt threatened by it. But Tucker himself doomed the venture by moving with suspicious haste in issuing $15 million worth of stock to finance it. This led to charges of "fast-sell" tactics and a probe by the Securities and Exchange Commission that attracted a spate of adverse publicity. With that, Tucker and seven associates went to trial in October 1949 on 31 counts of conspiracy and securities and mail fraud. All were acquitted in January 1950 after what the jury termed a farce proceeding. Ironically, Tucker Corporation still had funds to produce its car, but public confidence was long gone. Receivers briefly considered going ahead before auctioning everything off at 18 cents on the dollar. Tucker's dream was dead.

Tremulis later sketched a stunning fastback coupe called Talisman as a proposed new '50s Tucker, and even Preston apparently still had hopes of building a car after his ordeal in Chicago. Though broken by the experience, Tucker moved to Brazil and was planning a two-seat kit sports car, the Carioca, when he died on December 26, 1956. He was only 53.

The Tucker saga has since been committed to film in Tucker: The Man and His Dream, released in 1988. Though the movie is good drama, director/producer Francis Ford Coppola plays fast and loose with some facts -- just as Preston occasionally did. For example, the closing "parade" sequence shows most every Tucker built, including two owned by Coppola himself, but those precious few cars never made a triumphant procession right after the Tucker verdict was announced, let alone in unpredictable springtime Chicago weather. At least you shouldn't fret over the Tuckers that get smashed in an earlier scene; they're replicas.