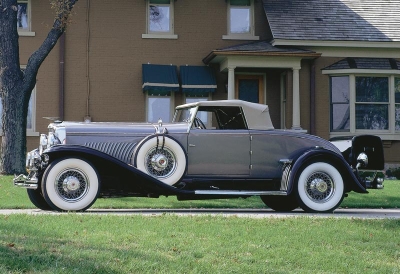 The Duesenbergs put their racing expertise to use in building their acclaimed Model J, seen here in the 1930 edition.

Fred and August Duesenberg built what many still consider the finest American automobiles of all time. Their great skills were evident early on. After the Duesenberg family emigrated from Germany to Iowa in the late 1800s, a twenty-something Fred built racing bicycles renowned for precision craftsmanship. The brothers then moved on to Des Moines and automobiles, where they designed the 1904 Mason, named for their backer. By 1912, they were putting together impressive engines for Mason's competition cars. The following year, they formed Duesenberg Motor Company to build both marine engines and racing cars bearing their name.

In 1917, the brothers set up in a larger plant at Elizabeth, New Jersey, to turn out aircraft and tractor engines as well. But this business was soon overshadowed by new triumphs in auto­mobile racing. In 1919, a special 16-cylinder Duesenberg engine pushed a Land Speed Record car to 158 mph on the sands at Daytona Beach, Florida -- astounding for the day. The following year, the brothers built a Bugatti-inspired 180-cubic-inch straight-eight with single overhead camshaft and three valves per cylinder. In 1921, this engine powered the only American car ever to win the French Grand Prix. Duesenberg-powered racers soon came to rival the great racing Millers at Indianapolis, winning the annual 500-miler no less than three times before 1930.

With their vast experience and growing reputation in racing, the Duesenbergs decided to move to Indianapolis and build a road car. Designated Model A, it appeared in late 1921 at the princely price of $6,500. A genuine result of lessons learned on the track, it carried a potent 259.6-cid overhead-valve straight-eight that could deliver up to 85 mph. It also boasted a first among American cars: four-wheel hydraulic brakes, a system Fred had devised for racing as early as 1914.

Though brilliantly engineered and fastidiously crafted, the Model A was no style-setter. Nor were the brothers very good businessmen. Thus, after selling fewer than 500 cars through 1926, they sold Duesenberg Motors to the brash Errett Lobban Cord, who also gained control of Auburn that year. Fred and Augie stayed on, however, and in 1927 they built a dozen or so Model A derivatives called Model X. But this was only a stopgap. E.L. Cord wanted something far more exotic.

He got it in the Duesenberg Model J, introduced to universal applause in December 1928. With characteristic immodesty, Cord proclaimed it "the world's finest motor car." And by most any measurement it was, the product of Cord's money and Fred's genius.