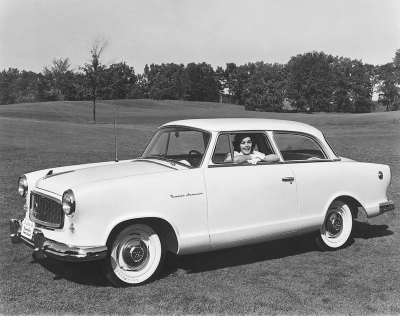 Rambler, the successful compact begun by Nash in 1950, became a separate make after introducing larger four-door models for '55 and new styling for '56. These and subsequent events reflected the changing fortunes of American Motors Corporation, founded in April 1954 with the Nash-Hudson merger instigated by Nash president George Mason.

Mason had long dreamed of combining Nash with Hudson, then bringing in Studebaker and Packard to form a new company with the same economies of scale as the Big Three. Without this, he warned, none of these four independents could survive over the long term.

As a halfway measure, he ­persuaded Packard president James Nance to take over ailing Studebaker, which was also accomplished in 1954 (at Packard's ultimate peril). But when Mason died suddenly that October, so did his dream of a "Big Four." His assistant, George Romney, became AMC president, completely forgot about linking with S-P, and bet the farm on Rambler to lift AMC from the financial hole dug by its parents.

It was really all Romney could do, but events worked in his favor. Rambler bounded from strength to strength, helped like no other make by the flash economic recession of 1958. By decade's end, AMC was making serious money and Rambler was firmly established as Detroit's best-selling compact.

The 1957 Ramblers were continuations of the reskinned '56 models sold with Nash and Hudson badges. Besides new "R" hood medallions, cosmetic changes were limited to reshuffled trim and a T-shaped grille ornament to fill the void above the eggcrate section. The big news was V-8 power: AMC's 250-cid, 190-bhp engine, introduced in '56 (a derivative was bored out for 1957's new AMC 327).

V-8 Ramblers were available in four body styles, each of these unit-construction four-doors on the 108-inch wheelbase introduced for '55. Variations involved sedans and Cross Country station wagons with and without B-pillars -- making Rambler the first in Detroit with hardtop wagons. As before, all offered a choice of Super or Custom trim. So did a parallel six-cylinder line retaining the 195.6-cid engine familiar from Nash days. However, that engine was tweaked quite a bit, going from 120 bhp to 125/135. Sixes also included a price-leader DeLuxe sedan at $1961. Other '57 Ramblers sold in the low-to-mid $2000s.

These were solid, reliable, smaller cars that could be quite stylish with optional two-toning. As in the Nash era, exterior "continental" spare tires were available for sedans. Wagons boasted a roll-down tailgate window instead of a clumsy liftgate, something Ford and GM wagons didn't have. Future AMC chairman Roy D. Chapin, Jr., later recalled: "We just rolled with those cars. We couldn't get enough." Indeed, of the roughly 119,000 cars AMC built in calendar '57, all but 7816 were Ramblers. The rest, of course, were Nashes and Hudsons, which would not return for '58 -- at least not as they had been.

Romney liked to assail Detroit's "gas-guzzling dinosaurs" while preaching the smaller-is-better virtues of Rambler. All the more surprising, then, that AMC had a performance Rambler for '57, a special Custom Country Club four-door hardtop aptly branded Rebel. Arriving at midyear with flashes of anodized aluminum on its flanks, Rebel carried the same 255-bhp 327-cid V-8 as the final Nashes and Hudsons, but was much quicker because it weighed significantly less than those cars. The extra power made Rebel more of a handler than other Ramblers, so AMC included stiff Gabriel shocks, a front antiroll bar, heavy-duty springs, power steering, and power brakes. Performance was impressive by most any standard, let alone for a Rambler. In one test at Daytona Beach, a Rebel covered 0-60 mph -- and 50-80 -- in scarcely more than seven seconds. It might have been quicker still with Bendix mechanical fuel injection, but that promised option never materialized.

No matter. With 9.75:1 compression, the Rebel drank premium fuel and a fair bit of it, which hardly fit Rambler's economy image. And at $2786 it was the costliest '57 Rambler, which was another likely factor that kept production to just 1500 units.

During this period, economy imports were quickly climbing the sales charts, led by Volkswagen's already antiquated Beetle. AMC noted the trend and replied with an unprecedented move for 1958, a revival of the 100-inch-wheelbase 1955 Rambler two-door sedan. Renamed Rambler American and wearing a new mesh-type grille and full wheel openings, it offered DeLuxe, Super, and stripped "business" models at a low prices ranging from $1775 to $1874. With those prices in a recession year, the American couldn't help but sell, and over 30,000 were registered for the model year.