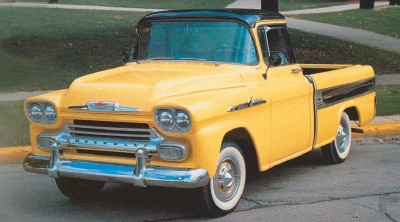 The 1958 Chevrolet Cameo Carrier pickup was the last of the costly Cameo line, making it a rare find today.

Though the Cameo had set truck styling history with its smooth, car-like lines, it cost a premium over other trucks and had never sold well. In February 1958, it was replaced by all-new Fleetside bodies, with "jet-pod" sculpturing along the cargo bed.

The Fleetside brought a line-wide application of a styling technique the Cameo had pioneered: full-width rear bodywork, plus a chrome grille, bumpers, and trim. This was an important step for Chevrolet, since it made available Cameo-like styling at a moderate price. This precluded further production of the Cameo itself.

As a result, the 1958 is the rarest of all Chevrolet Cameos -- only 1,405 were built. Another reason for the low production was the negative year for the industry as a whole: the recession kept truck production to well under a million, the lowest count since 1945.

The grillework, in keeping with contemporary tastes, was complex and "busy," incorporating parking lights. The hood was reshaped to make it level with the cowl, and set off by new series-designation plates.

A total of 15 solid and 15 two-tone colors were available, including such vivid new shades as Dawn and Marine blue; Polar, Oriental, and Glade green; Tartan turquoise; and Kodiak brown.