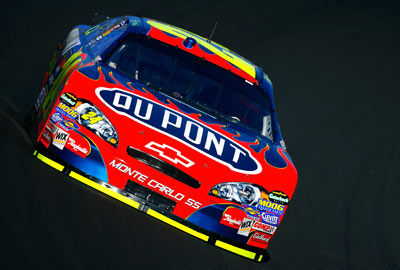 Jeff Gordon during practice for the Bank of America 500 at Lowe's Motor Speedway on Oct. 11, 2007, in Concord, N.C.
Rusty Jarrett/Getty Images for NASCAR

NASCAR racing may have been a free-for-all in the early days, but today it is highly regulated, especially when it comes to the cars on the track. In addition to determining the points system, NASCAR also develops the rules that govern how cars are built and races are run. Let's take a look at what some of these rules cover (and don't forget to check out How NASCAR Race Cars Work for additional information).

Engine: Teams can't use just any old engine. The engine in a NASCAR Nextel Cup Series race car must conform to very specific parameters. It must have eight cylinders, a compression ratio of 12:1, a displacement no greater than 358 cubic inches and a performance package that allows for greater engine torque without sacrificing durability. All NASCAR race cars also use a carburetor, not a fuel injector, to deliver the fuel-air mixture to the engine. This is the starting point for each team, which then tweaks and tunes the engine to its liking. As a result, horsepower can vary, although most engines produce about 750 to 790 horsepower.

Body: Even though a NASCAR race car is based on a Ford, Chevy or Dodge that rolls off the factory floor, it doesn't come with the same body. Every team fabricates its body from scratch using synthetic fiberglass composite material, making sure the finished car fits a prescribed length and width. NASCAR requires the rear spoiler to be at 70 degrees.

Tires: NASCAR race cars use wide, treadless tires, but the teams don't have to worry about hauling or installing tires on race day. Instead, Goodyear, NASCAR's exclusive tire supplier, prepares the tires. To help contain costs, NASCAR limits the number of tires a team can use during practice and qualifying. There are no such limits during a race, and most teams use anywhere from nine to 14 sets of tires.

Gas tank: Fuel cells are strictly regulated to make sure gas mileage, not capacity, helps determine winners and losers. The current size of the fuel cell is 22 gallons, but NASCAR may change the spec to 18 gallons in the near future.