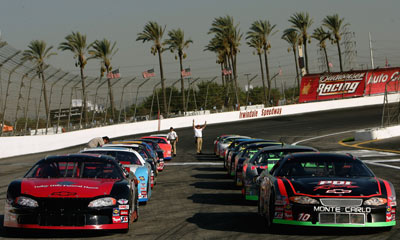 Cars line up on the track for qualifying in the Toyota All-Star Showdown on October 20, 2006, at the Irwindale Speedway in Irwindale, Calif.
Donald Miralle/Getty Images for NASCAR

In the NASCAR Nextel Cup Series, Sunday is race day, but a team's work week is not just one day long. Let's take a look at a typical week in the world of NASCAR.

For NASCAR drivers, Monday is a day spent off the track. They use the time to recover from the previous day's race and, if they performed well, to relive the glory with their team members. Sometimes, they have to make an appearance on behalf of one of their sponsors, signing autographs and standing for photographs.

Teams dedicate two days of each week to testing their cars at tracks where upcoming races will be held. In these test sessions, the crew chief and his team experiment with the cars, finding just the right setup that will allow a fast qualifying time on that particular track.

On Thursday, drivers fly to the location of the week's race. Most will travel with their families and stay in motor homes that are parked at the track.

Qualifying is held on Friday, which is the most important day of the week next to race day. The process involves a driver completing one or sometimes two laps around an empty track. The whole idea is to go as fast as possible without losing control of the car or crashing, and at most tracks, qualifying speeds are often far greater than the highest speeds attained during the race. During qualifying, it's not unusual for cars to exceed 200 mph, even though the average speed on Sunday will be much lower -- perhaps 180 mph, depending on the track.

There are usually more drivers than the 43 available slots in a NASCAR Nextel Cup Series race, so getting a good qualifying speed is critical. Only the 38 fastest times qualify, with provisional entries filling the last five slots. Provisional entries are reserved for drivers who don't have a good qualifying session but, because of car owner points accumulated during the season, are allowed to join the field.

Each driver's best qualifying time determines his position in the starting lineup. The pole winner is the driver who runs the fastest lap and gets to start in the front row, usually in the inside position. The second-fastest qualifier usually starts on the outside pole -- the outside position on the front. The rest of the field falls in behind these two cars based on their qualifying times so that the final grid consists of 21 rows of two drivers. One driver occupies the final row.

The day before a race is devoted to practicing and strategizing based on the results of Friday's qualifying. "Happy hour" is the final hour of practice and, despite its name, is a crazy and hectic rush to get the car ready for the next day.